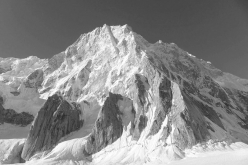 Latok I and its formidable North Ridge, attempted for the first time in 1978 by the Americans Jim Donini, Michael Kennedy, Jeff Lowe and George Lowe.
Photo by Luka Lindic

The video Alpinists at Large featuring the legendary attempt to climb the North Ridge of Latok I, carried out in 1978 by American alpinists Jim Donini, Michael Kennedy, Jeff Lowe and George Lowe.

In 1978, an elite team of American alpinists comprised of Jim Donini, Michael Kennedy, Jeff Lowe and George Lowe set off for an unclimbed peak in the remote mountains of Pakistan. Their aim: the first ascent of the mountain via the highly technical, interminable north ridge of Latok I. Although after 26 days of efforts they did not reach the summit, the style in which the 1978 Latok I team approached the north ridge, and the commitment they showed to each other, rather than success, remains a shining example of values in alpinism. The famous attempt is now considered one of the greatest moments and also failures in the history of alpinism and is retraced in the first part of the fascinating short doc Alpinists at Large.

As is well known, after numerous attempts during the last four decades the ridge was completed, but the summit not reached, by the Russians Alexander Gukov and Sergey Glazunov in 2018. The cost though was high: Glazunov fell to his death ind ascent and Gukov was dramatically rescued after having been trapped on the mountain for over 6 days. A few weeks later Slovenian alpinists Aleš Česen and Luka Stražar, along with Britain’s Tom Livingstone, climbed the mountain via the north and south face. The three were only the second team to reach the summit of the 7,145m high mountain in Pakistan’s Karakorum after the 1979 Japanese first ascent led by Naoki Takada.