► News ► Alpinism ► Aiguille de Pélerins, John McCune and Will Sim go Above and Beyond
Versione italiana 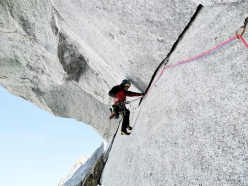 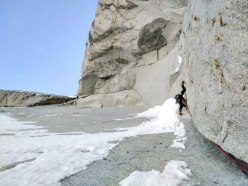 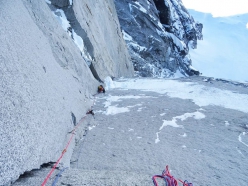 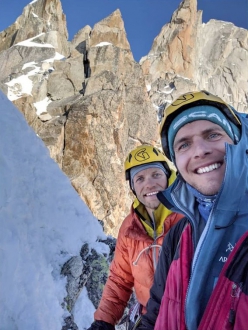 PORTFOLIO / gallery Portfolio: Aiguille de Pélerins, John McCune and Will Sim go Above and Beyond

Aiguille de Pélerins, John McCune and Will Sim go Above and Beyond

British mountaineers John McCune and Will Sim have climbed what is likely to be a new route to the left of Beyond Good and Evil on the North Face of Aiguille de Pélerins in the Mont Blanc massif. Above and Beyond has been graded ED M6 6b+.

On Tuesday 30 April British mountaineers John McCune and Will Sim climbed what appears to be a new route up the austere North Face of Aiguille de Pèlerins in the Mont Blanc massif.

Visibile from Chamonix, the mountain is famous for calibre routes such as the Rébuffat-Terray, first ascended by Gaston Rébuffat and Lionel Terray in summer 1944 and later climbed in winter 1975 by Rab Carrington and Alan Rouse, and the legendary mixed climb Beyond Good and Evil, first ascended by Andy Parkin and Mark Twight between 21 and 22 April 1992.

It was while repeating Beyond Good and Evil last year that McCune noticed a huge roof in the rock scar to the left and, importantly, a crack running all the way along the back. "I had no idea what size it was but I imagined it would be a fun one to climb" McCune explained, adding "It looked like a beautiful pitch on perfect clean rock."

After spending the night in the winter room of the Refuge du Plan de l'Aiguille, McCune and Sim followed the Rébuffat-Terray for circa 250m meters and then broke out left into new terrain heading upwards towards the obvious roof. The pair climbed 4 pitches of mixed corners past difficulties in the region of M6, up to where the cracks got very steep and clear of snow and ice. At this point McCune put on his rock shoes for the next 2 pitches that led them through the roof.

"It was a lot of fun and climbed really well. A huge guillotine flake with a daunting resonance at the end of the traverse was concerning me but thankfully it seemed adequately stuck in and I was able to climb out and round it to a good belay in an icy corner."

Carrying the pack and without rock shoes, Sim managed to aid climb and lower out from the roof, before taking the lead and following a series of corners and cracks which eventually led them to the top of the buttress. From here they traversed over to Rebuffat Terray, which they abseiled down.

McCune had attempted the line twice last season with both Danny Uhlmann and Chris Warner but, only having the opportunity to make day hits from Chamonix, they ran out of time on both occasions and retreated, despite McCune and Warner reaching the roof.

This portion of the face is believed to have been affected by rockfall in the 1950's or 60's, hence the rock scar, and while there may have been a route on the buttress prior to the rockfall, it has probably not been climbed since. "There was no sign of any old gear, and we did a bit of cleaning of loose rocks and flakes, which wouldn't have been there if it had been done before." McCune told planetmountain.

Concluding on his Instagram account, McCune stated "It's a good one because you can see it from all around town and I've been looking back up at it all year wondering. No more wondering, it goes and it was a fun little adventure with skis, tools and rock shoes"

The pair have named the climb Above and Beyond, to fit in with Beyond Good and Evil and One Step Beyond, put up by François Marsigny and Thierry Renault on 12/12/2001 on the same mountain.

17.02.2013
Aiguille des Pelerins Voie Normale
On 14/02/13 Julien Herry, Luca Rolli and Davide Capozzi ascended and then skied and snowboarded down the Voie Normale on Aiguille des Pelerins. A descent - the first recorded ski and snowboard descent - which is highly particular and unlikely to be repeated soon without exceptional snow conditions such as those found this year, as Capozzi explains in his report.