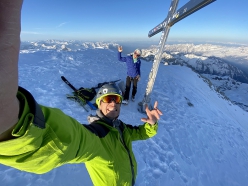 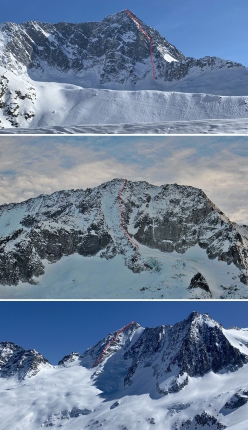 Italian mountaineers Leonardo Gheza and Giulia Venturelli enchained the north faces of Adamello, Cima della Busazza and Presanella in a single day. The 51km outing covered 3700 vertical gain and was completed in 22 hours.

Between the 29th and 30th of March Italian alpinist Leonardo Gheza and the mountain guide Giulia Venturelli linked the three north faces of Adamello, Cima della Busazza and Presanella in a single day, climbing 3700 vertical gain and completing their 51 km journey in a total of 22 hours.

The pair set off on Monday 29 March towards the Garibaldi Refuge at the foot of the north face of Adamello and after resting for a few hours in the winter room they left shortly before midnight to climb Senza chiedere permesso (V/5, M6, 800m), established in 1992 by Andrea Mutti and Rocco Salvi. They summited at at 5:05 and. "The last pitch" as seen in the video "is a nice total dry crack that led us to the top."

At 5:20 am they put their skis back on and descended to Pian di Neve, enjoying the sunrise in total silence. At 8.10 they reached Passo Presena where they met up with some friends, then and after a short break they climbed Busazza via Spigolo Nord (IV/M, 65°, 500m), which they summited at 11.55 am. From there they traversed the airy ridge before descending to the Cercen basin and continued on via the San Giacomo pass to reach the base of Mount Presanella.

"We’re in good time, it’s still light and the temperatures are excellent," commented Gheza at this point. Climbing quickly up Spigolo Nord Centrale (IV/M, 55°, 550m) they reached the summit cross at 18.55 after having been on the go for 19 hours. From here they descended along the normal route down into Val di Stavel where they were greeted by Ettore Zorzini.

The triptych was completed in single day on 14 February 1989 by Andrea Sarchi and Adriano Greco, who chose different routes on both Adamello and Presanella.