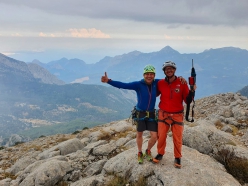 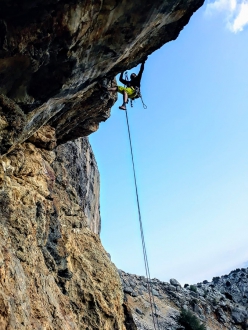 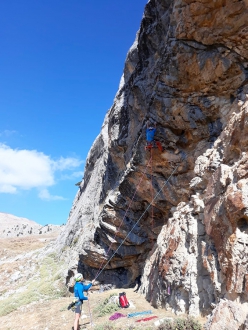 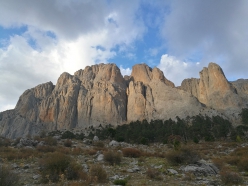 An Italian (Gilberto Merlante), a Pole (Wojtek Szeliga) and a Turk (Tunc Findic) have made the first ascent of 500+, a multi-pitch rock climb up the west face of Domuzucan Peak close to Geyikbayiri in Turkey.

On 18 October 2019 an Italian (Gilberto Merlante). a Pole (Wojtek Szeliga) and a Turk (Tunc Findic) joined forces and decided to open a new route up the west face of Domuzucan Peak, the mountain located in the Antalya about 16km fromGeyikbayiri, the famous Turkish sport climbing mecca.

It may sound like a joke, but after several adventures and minor setbacks that happen to all climbers who try to establish a new route, the trio managed to complete their 205m trad climb. Bolts were added to the belays at a later date, as was one bolt on the first pitch (the crux) that tackles the splendid.

The route is called 500+ (500 zlotys is the monthly benefit each Polish family receives from the government for every child up to 18), the difficulties are 6c max, 6b obligatory, RS2, and a complete rack of camming devices up to #4 BD is recommended, as is a set of nuts. The route was cleaned later, with vegetation and unstable boulders removed to make it a little safer and more enjoyable. It is located at an altitude of 2000 meters and acts as a great alternative during the hot and humid days that sometimes occur at Geyikbayri.

A few days after the first ascent, the international team visited the splendid Dedegol mountains close to the Isparta province. The climbers established a few new routes and repeated Nameless Power and Soleyman le magnifique (Soliman) up Namless Tower in the Dedegol massif, first ascended in 2006 by Michel Piola and Benoit Robert (400 meters of pure limestone with 8a max 7a obbl. RS3 difficulties, bolts & trad. This is the most difficult combination in the entire Dedegol massif, a unique tower in an isolated position up rock that is similar to that of Marmolada in the Dolomites. The rock in the area is a grey, compact limestone with different routes first ascended by Michel Piola and friends; perhaps information will soon be provided to the climbing world (something can already be found on the internet). For a few years the area was closed for military purposes, and after being transformed into a natural park the Turkish government and various local authorities are working at making it accessible to all.

For any logistical information you can write to the Italian member of the team: gilbertomerlante@hotmail.com
Gilberto Merlante

09.04.2015
Sivridağ, new trad climb in Anatolia, Turkey
Tunç Fındık reports about Sivridağ in the Beydağları massif, one of the most important trad climbing areas in Turkey where together with Rauf Osman Pınarbaşı he has now made the first ascent of Punisher (450m, VI).

03.04.2015
Geyikbayiri saved
The climbing area Geyik Bayiri in Turkey has been saved following the cancellation of the mining exploration license.

03.04.2012
Okuzini, new sport climbs in Turkey by Sergey Shaferov
In March 2012 Belarus climber Sergei Shaferov established a series of sport climbs at Okuzini in Turkey, the most difficult being All inclusive 8c/c+.