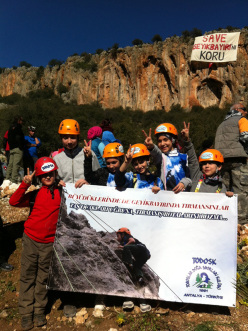 During the protests to save Geyikbayiri in Turkey. The mining exploration license has now been cancelled.
Photo by www.climbersgarden.com

The climbing area Geyik Bayiri in Turkey has been saved following the cancellation of the mining exploration license.

Excellent news from Turkey: there will be no mining exploration at Geyik Bayiri, one of biggest and the most famous sport climbing areas in the country. The threat of quarrying, which would have affected over 1/3 of the 1000+ routes and undoubtedly scarred the landscape forever, appeared at the start of February when a mining company received governmental permission to explore the area. A grassroots protest movement immediately formed that attracted international support. The online petition to save the area was signed by almost 18,000 people in just a few weeks, demonstrating the importance of this area.

The mining exploration license has now officially been cancelled by Migem, the office for Mining Affairs that operates under the Ministry of Energy and Natural Resources. Interestingly, the permit was cancelled on the request of the mining company and the letter states that mining activities will not be allowed in this area for the future.

While this is regarded as an important step in the battle to save the area, the local activists will continue their recent judicial appeal in the hope that a ruling in their favor will safeguard the area against any mining requests in the future. As Zuleyha Geels from the local Climbers Garden states: "The more official documents we have from different sources stating that mining is not allowed here, the better. All of us here at Geyikbayiri are overjoyed and extremely grateful to everyone who took the time to sign the petition and spread the news."

At www.change.org/geyikbayiri the petition continues, while the latest updates can be followed on ‘SAVE Geyikbayiri’ Facebook page