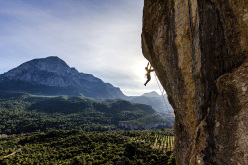 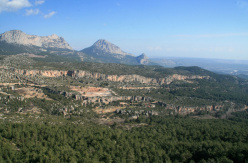 Idyllic Geyikbayiri, close to Antalya in Turkey
Photo by www.climbersgarden.com 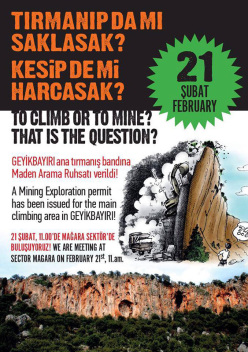 PORTFOLIO / gallery Portfolio: Petition to save climbing at Geyikbayiri in Turkey

Petition to save climbing at Geyikbayiri in Turkey

An appeal has been launched to safeguard the sport climbing at Geyikbayiri, the most important climbing area in Turkey, following the release of a mining exploration permit.

Rock climbing at Geyikbayiri, one of biggest and the most famous sport climbing areas in Turkey, may be at risk due to a project that received official permission at the end of last year to explore the possibility of mining in the area. Should marble suitable for quarrying be found, this would affect circa 350 of the 1000 routes at Geyikbayiri, in the sectors Cesme, Sarkit, Mağara, Anatolia, Dragon, Güzel Manzara, Posaidon, Ottoman, Mevlana, Barbarossa, Akdeniz and Ekos. At present the mining research has not yet started and a grass-action climber's protest has sprung up against this recent development. Published below is the press release and the link to sign petition.


What is going on in the world famous Climbing area Geyikbayırı?

Geyikbayırı is a well developed outdoor sports region that is situated in a magnificent setting at the foot of the Taurus mountains just 25 km out of Antalya city. The region welcomes outdoor sport lovers especially for rock climbing, trekking, mountain biking, motor cross, off-road. The more scientifically inclined enjoy birdwatching and botanical excursions, families drive up to bbq and watch the climbers, Antalya residents own weekend homes in the village and the villagers use the grounds for grazing their goats and grow vegetables on the summer pastures above the village overlooking several ancient cities. For these reasons tens of thousands of people visit this area every year. Rock climbing only has a short history dating back to 15 years but the climbing and nature could very well be enjoyed by many more over the next few centuries to come.

Climbing attracts more than 10.000 climbers from both national and international climbing communities leaving a very positive financial impact on eco tourism and rural tourism in the surrounding villages and Antalya. The regional economy is also supported by several sports festivals sponsored by world famous brands that attract thousands of participants.

Due to all the above mentioned reasons, when 67 hectares of land, which is right on top of the main climbing wall, receives a mining exploration permit, it is inevitable not to see the irreversible damage the mining would cause to the area. Nature will be destroyed, eliminating grazing grounds and agriculture. The water source that feeds the city of Antalya and its neighbouring villages will dry out. Turkey’s world-wide famous hiking trail The Lycian Way will start in rubble. Rock climbing would end and so would eco toursim.

In 2016 Antalya will be hosting the EXPO event with the theme “ Children and Flowers: A Green Life for Future Generations.” Mining activities do not suit the immediate surroundings of Turkey's foremost tourist destination and handing out mining exploration permits asks for a more delicate approach.

In the light of this unfortunate development, in order to emphasise and share the importance of this area, “Geyikbayiri Climbing and Outdoor Sports Festival” will be held on February 21, 2015, Saturday. We invite you all to join us. We hope that this mining exploration permit will be cancelled soon.

At www.change.org/geyikbayiri a petition has already been signed by more than 8000 people within the first week.

The latest updates can be followed on ‘SAVE Geyikbayiri’ Facebook page