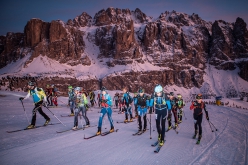 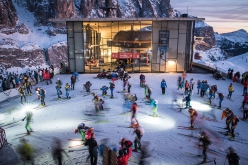 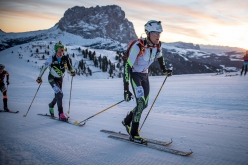 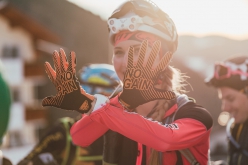 After a two-year stop, the Sellaronda Skimarathon will take place in the Italian Dolomites tomorrow. As per usual the most famous night ski mountaineering competition will cross four mountain passes, Campolongo, Pordoi, Sella and Gardena and cover a total distance of 42 kilometers and +2700m altitude gain.

The tension is growing at Corvara in the Dolomites as over a thousand Sellaronda athletes are expected to reach the village in the next few hours to collect their race bibs and prepare for the classic night ski mountaineering competition which will begin, as usual, at 6 pm. As usual the athletes will skin round the four mountain passes: Campolongo, Pordoi, Sella and Gardena, 42 kilometres and 2700 metres of vertical height gain.

After Pierra Menta, the legendary skimo competition at Arêches-Beaufort in France’s Haute Savoie, and the Ski Mountaineering World Cup in Val Martello, there was the off chance that Matteo Eydallin and Michele Boscacci (current leader of the overall World Cup) might compete in the Sellaronda, but the decision to race was made right at the last minute.

"We chose to take part in the Sellaronda - said Michele Boscacci - only at the end of the World Cup comp in Val Martello. Matteo after the Pierra Menta was not sure whether he should take part or not,  but on Monday we spoke and sent in the registration form. It will be a very difficult race at an extremely fast pace, I have already done the Skimarathon a couple of times, but for Eydallin this will be his first".

As well as the two Italians, the following top athletes will also take part in the race:  Alex Oberbacher (silver medal at the European Vertical race) with Davide Magnini (winner of the Individual Race in Val Martello), Jakob Herrmann and Christian Hoffmann, Federico Nicolini and Patrick Facchini. Confirmation has also come came from Philipp Götsch with Andreas Reiterer and François D’Haene together with Gedeon Poca Cottilloux, as well as Filippo Beccari who will race with  Martin Stofner.

It is important to note that Alba De Silvestro with Alessandra Schmid and Elena Nicolini with Katia Tomatis will take part in the female race .

The Dolomiti Superski slopes are in perfect condition and thanks to the weather forecast there is a good possibility that the records set in 2019 can be broken.

The male record currently stands at 2:56’59’’ (Filippo Barazzuol-William Boffelli) while the female time to break is 3:32’37’’, established by Laetitia Roux and Martina Valmassoi.

13.03.2022
Pierra Menta 2022 won by Matteo Eydallin - Michele Boscacci and Axelle Gachet Mollaret - Tove Alexandersson
The 36th edition of the classic Pierra Menta ski mountaineering competition in Arêches-Beaufort in France took place from 9 to 12 March 2022 and was won by the Italians Matteo Eydallin and Michele Boscacci. The French-Swedish team comprised of Axelle Gachet Mollaret and Tove Alexandersson won the women's event.

21.02.2011
The Sellaronda hourglass, the winners and the magic of the Ski Alp
On 18 February 2011 Alain Seletto and Tony Sbalbi, Roberta Pedranzini and Francesca Martinelli won the 16th Sellaronda Skimarathon, the great ski mountaineering competition in the Dolomites. An analysis of the magical tour which crosses the passes Gardena, Campolongo, Pordoi and Sella by Lorenzo Scandroglio.

08.03.2010
Sellaronda, one long roller coaster of emotions
On 05/03/2010 the 15th Sellaronda Skimarathon, the historic ski mountaineering race in the Dolomites, was won by Guido Giacomelli and Hansjoerg Lunger ahead of Thomas Martini and Matteo Pedergnana, followed by Ivan Antiga and Trettel Thomas. The womens' event was won by the Weger and Gross. The extenuating and freezing cold race, as recounted in first person by Lorenzo Scandroglio, provided excitement even beyond the race course.

25.02.2007
Sellaronda Skimarathon 2007
Guido Giacomelli and Hansjoerg Lunger, and Roberta Pedranzini and Francesca Martinelli have won the 13th edition of the Sellaronda ski mountaineering competition. 720 athletes competed in this classic night ski mountaineering marathon in the Dolomites, cheered on by an enthusiastic crowd.
03.03.2004
Sellaronda won by Nicolini-Vescovo and Secco-Calliari
Despite appalling conditions the Sellaronda celebrated its 10th anniversary in the Dolomites last weekend and was won by Nicolini-Vescovo and Secco-Calliari