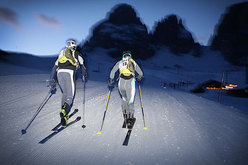 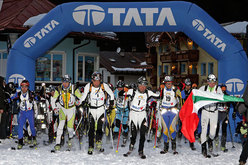 The start of the XV Sellaronda Skimarathon, Dolomites
Photo by www.newspower.it 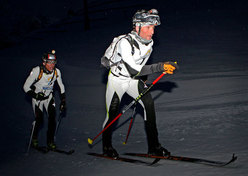 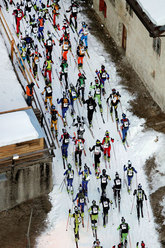 The start of the XV Sellaronda Skimarathon, Dolomites
Photo by www.newspower.it

On 05/03/2010 the 15th Sellaronda Skimarathon, the historic ski mountaineering race in the Dolomites, was won by Guido Giacomelli and Hansjoerg Lunger ahead of Thomas Martini and Matteo Pedergnana, followed by Ivan Antiga and Trettel Thomas. The womens' event was won by the Weger and Gross. The extenuating and freezing cold race, as recounted in first person by Lorenzo Scandroglio, provided excitement even beyond the race course.

First image. Sellaronda Skimarathon 2010: the first image is that of the centre of Canazei with its river of competitors, ready to start the race next to the frescoed houses. A rectangle, half a kilometer long, of human beings dressed in race suits, chafing in order to warm up, with helmet and headtorch fimly strapped to the chins, glances which occasionally stray onto the spectators behind the barriers and the ancient wooden houses, before focussing back on their equipment. On the straw of their camelbak which, exposed for just those few centimeters from the rucksack to their mouths, must remain wrapped up in their clothes and wedged beneath the shoulder strap to exploit all bodyheat and stop the liquid from freezing. With the start just moments away, the speaker remembers Diego Perathoner, the inventor and soul (still alive today) of this ski mountaineering competition which works its way arout the Sella mountain group in the Dolomites: a reverent silence falls, for a minute, followed by an applause and the shuffling of skis on the snow. Martin Riz is in the front row, he who was there on Saint Stephen's day, with Diego and the three friends of the Mountain Rescue Squad who died beneath an avalanche close to Passo Pordoi while searching for two alpinists who had been swept away by an earlier avalanche. His competition won't be like one of many.
This is how the 15th edition of the Sellaronda gets underway: the long cordon elongates gradually, the light of day weakens, headtorches are turned on. The World Championships in Androrra, which are showering the Italian squad with a host of medals, hasn't taken away all the best competitors. Guido Giacomelli is here. And he's here with his historic team-mate, the eternal Hansjorg Lunger, with whom in 2008 he set the record at 3:15:07. Here, as in all stamina sports, there is no turning back. The standards rise continuously and they, Giacomelli and Lunger, have improved, together with their gear. This time it's the cold however which will steal at their energy reserves.

Second image. Once again words paint the second image. We reach the top of Passo Sella at 2174 meters, an extremely long row of headtorches close to each other, often side by side. It seems endless. Once it reaches the col, the row unravels and thins out, the lights speed quickly down towards Selva di Val Gardena. Not everyone smiles, on the contrary. The suffering is mainly due to the biting cold, not the race in itself. The wind blows hard from the North-East, ice penetrates everywhere, shapes itself onto eyelashes and eyebrows, wraps itself around faces and works its way deep into gloves. Some take their wind jackets out of their rucksacks, put on a pair of warm gloves and while they begin their descent they protect their hands behind their bodies to avoid the air full on. They take their skis off at Selva, cross the road and run up it, dodging cars and the stewards who stop the traffic, to then get back onto the snow, put their skis and skins back on and off they go, up the second climb. Those who know about the race applaud, encourage the competitors with clenched fists: "alé, alé, go, go!" Some cars blow their horns. Others stop dumbfounded and watch these Martians: two worlds meet which will never understand one another.

Third image. Close to Passo Gardena, at 2298m the highest point of the race. The volunteers, loyal fans, those who wait for friends and curious spectators are everywhere. They endure the coldest cold of all, because they stand still, for hours. And up high the temperatures drop lower than -20 °C. A glass of tea, a handful of dried fruit with something which tastes of vanilla seems like a godsend, the greeting of someone who recognises you, shouting your name like someone possessed, but you'll never know who it was. And up ahead it's them, as usual, who set the pace: Guido Giacomelli and Hansjorg Lunger. The race against the clock and against the cold. They feel it too, like the others, but because they're faster they remain less at altitude. The first teams also have a refreshment service organised by their friends who drive from one mountain pass to the next. They swap water bottles, with the drink concoction, electrolytes and maltodextrins depending on what stage of the race they're in and how they feel. The well organised have even prepared some hot coffee for their favourites. Down at Corvara half the race is over with, but the finishing line is still distant. The third climb towards Passo Campolongo is the one which gets you. You think: "it's the one with least height gain." But no, it's eternal. First it climbs through the forest, then it descends shortly before ascending steeply and finishing you off. The crisis hits you here. Either you endure and overcome it, or you stop here. 70 teams retire from the race, 140 athletes who don't see the finishing line, halted by the cold or the chronometer at the time gates. The descent to Arabba, with temperatures rising to a "mere" -8°C, is the one which preceeds the proud final rush. One more ascent and it's all over with.

Fourth image. On the summit of Pordoi, those who know it think about nothing else: it's here that Diego and his friends disappeared. It's here that the avalanche betrayed them. A final cup of tea, a glance at the clock and down as fast as possible, along the last, endless descent down steep slopes, smooth as a pool table, eating the powder whipped up from those in front of you. Down down to the first lights of the village, the orange protection nets which help you orientate yourself, then the slalom through the network of houses to reach the finishing line. Guido and Hansjörg fail to exceed themselves by just a couple of seconds, incredible! Martin Riz is one of the first to cross the finishing line together with Alain Seletto, emotions clearly visible. 208 teams reach Canazei. Many hop like frogs to keep warm. The volunteers rush to help them, putting them onto warm beds, massaging them. Then there's the party. Thanks Diego! This is the competition which you left for our short, extremely long excitement.