► News ► Competitions ► The Sellaronda hourglass, the winners and the magic of the Ski Alp
Versione italiana 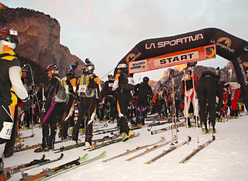 The start at Selva Val Gardena
Photo by NewsPower 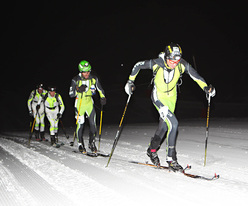 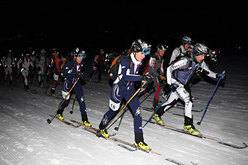 PORTFOLIO / gallery Portfolio: The Sellaronda hourglass, the winners and the magic of the Ski Alp

The Sellaronda hourglass, the winners and the magic of the Ski Alp

On 18 February 2011 Alain Seletto and Tony Sbalbi, Roberta Pedranzini and Francesca Martinelli won the 16th Sellaronda Skimarathon, the great ski mountaineering competition in the Dolomites. An analysis of the magical tour which crosses the passes Gardena, Campolongo, Pordoi and Sella by Lorenzo Scandroglio.

Friday's race around the Sella massif was one of the most beautiful on record. 300 teams started, but not all finished the "marathon" with skis and climbing skins. The temperatures were acceptable and the gigantic moon left the stage only briefly, letting snowflakes fall in its wake. This was the first competition "captained" by Oswald Santin, after Diego Perathoner's tragic death during a mountain rescue operation. "I wanted the competition to enter right into the heart of the villages" a smiling Santin declared on Friday night. And the 2011 edition turned out to be just perfect, so much so that the competition left its mark on much more that just the villages.

Fatigue was immeasurable, but how could one not smile with such an applause? Every time the race passed through the village centers, there were hundreds, perhaps thousands of spectators behind the barriers. And in every town square, where the snow was brought to create a route for the ski mountaineers to race through, a commentator made the names of the prime athletes reverberate in heaven, as well as those less famous: "Here we go, the heel has just been released, the bindings and boots are now in ascent mode! The competitors are now taking their skins out of their suits and sticking them onto the skis. And now they're off, up to the next pass!"

In the end Guido Giacomelli, the Sellaronda record man, wasn't there. Nor his historic partner Hansjorg Lunger; Guido simply couldn't have competed with anyone else. But there were other ace athletes, such as Tony Sbalbi, Graziano Boscacci, Alain Seletto, Daniele Pedrini, Francesca Martinelli and Roberta Pedranzini. And the competition they provided on Firday night was spectacular.

Unlike previous editions dominated from start to finish by the same pace setters, this time a surprise were held in store. Graziano Boscacci and Daniele Pedrini were quickest out of the starting block and, for more then half the competition, held on to their lead. But then the two favourites, Tony and Alain, caught up irresistibly. They overtook the leaders at the third ascent and with this manoeuvre came victory. Different story in the women's event, where Francesca Martinelli and Roberta Pedranzini from Bormio made making predictions a safe bet. Their nth record proved unbeatable and a staggering 37th overall when ranked with the men.

Behind them were those who kept an eye on the stopwatch to improve on their personal best and to win bets against friends. And of course there is no other competition that allows for such precise time comparisons, if it is true that, regardless of how much conditions change, regardless of the how quick the snow is, the Sellaronda is never like other competitions where a comparison with previous race times makes no sense whatsoever. Which means that the main objective, year in year out, is to stop the clock a couple of minutes faster.

There are athletes who build their dreams on the 5 hour mark, others on 4. But in the end the result is always the same. Dozens of places higher up the ranking, even if it is that threshold which motivates a year of training, hopes of taking part, the perseverance needed to continue, to never give in to the cold and to fatigue. It's a liquid threshold. Nothing is more transitory, nothing more powerful than that hourglass of time.