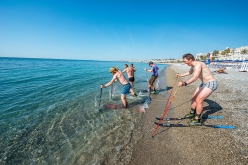 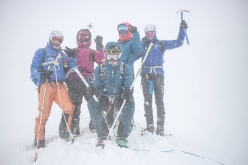 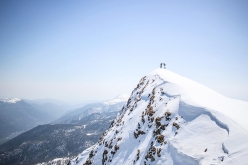 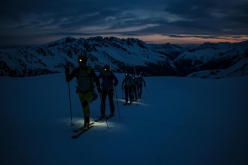 Yesterday the Red Bull Der Lange Weg came to an end in Nice, France. The long ski mountaineering traverse across the Alps from Vienna to Nice was completed by Bernhard Hug, David Wallmann, Philipp Reiter and Janelle Smiley and Mark Smiley after 1,721 kilometers and gained almost 90,000 meters height difference.

After all that bad weather, and after being up in the mountains for so long, it seemed strange to see them walking on the sandy beach, basking in the sun and with skis still slung on their shoulders. Yet there they were, yesterday morning, after 1,721 kilometers and 89,644 meters of positive altitude gain; Bernhard Hug, David Wallmann, Philipp Reiter and Janelle and Mark Smiley had managed to complete the Red Bull Der Lange Weg, the ski tour across the Alps that took them from the outskirts of Vienna to the golden beach at Nice in 36 days.

The five ski mountaineers had set off on 17 March with two other partners, Spain’s Núria Picas and South Tyrol’s Tamara Lunger, two extremely strong athletes and alpinists who, after having contributed significantly in the expeditions eventual success, were both forced to abandon the traverse. Weather conditions permitting, the aim of the traverse was to follow in the footsteps of the historic Austrian team, composed of Robert Kittl, Klaus Hoi, Hansjörg Farbmacher and Hans Mariacher who, in 1971, had completed this particular undertaking.

Weather conditions permitting is obviously the key word of this traverse, as indeed it is any time anyone takes into the mountains, and it has to be said that the 2018 team was forced to change the route and adapt on several occasions as it looked not only for the most logical way from east to west, but also the safest. This meant that some summits climbed in ’71 were not reached now as conditions were simply too dangerous and prohibitive, such as Mont Blanc. On Europe’s highest mountain the team stopped circa 100 vertical meters below the summit as visibility had been reduced to zero, winds had intensified and the avalanche danger was too high; the group took the only right decision and turned around.

Comparing what was achieved now with the 41 days almost 50 years ago is difficult, practically impossible therefore. What holds true though is the fact that that fantastic adventure was what inspired the entire team of this modern Red Bull Der Lange Weg. And what holds equally true is that in the end, as always, the greater meaning can be found in the entire journey, experienced during those 36 gruelling and incredible non-stop days across the magnificent Alps.

06.04.2018
Red Bull Der Lange Weg: the ski mountaineering traverse reaches halfway point
For the last 20 days Tamara Lunger, Núria Picas, Janelle Smiley, Mark Smiley, David Wallmann, Philipp Reiter and Bernhard Hug have been traversing across the Alps from Vienna to Nice. While Núria Picas has pulled out of the Red Bull Der Lange Weg, the others have crossed the Spluga Pass and are continuing westwards.