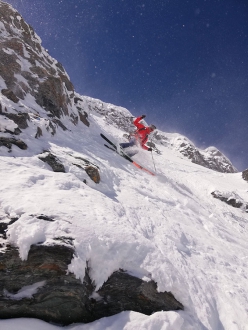 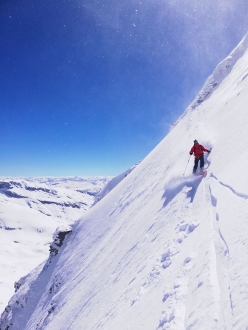 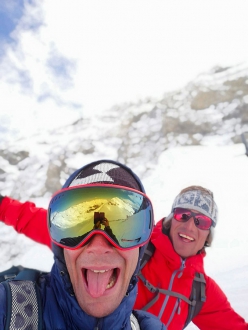 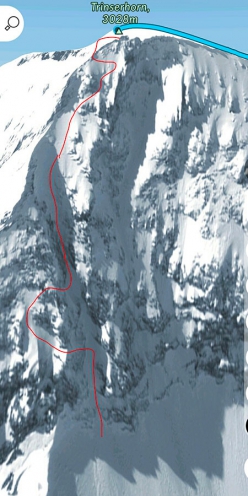 Sébastien de Sainte Marie and Marco Cavalli have skied what is likely to the first descent of the North Face of Piz Dolf / Trinserhorn (3027m) in the Swiss Alps. de Sainte Marie reports.

On Monday 15 April we skied a cool descent in Graubunden near Flims/ Laax. It's a 550m line down the north face of Piz Dolf (3027m). My local buddy Marco Cavalli had the idea of skiing this line and the Saturday beforehand he ascended almost to the summit to check out the snow conditions and tell me that we should go.

Last Monday therefore we took the Flims cable car then skined up 1000m to reach the top of Piz Dolf. The first part is wide and easy to ski, we encountered awesome snow. We then made small rappel followed by exposed traverse to negotiate a cliff in middle of our way. A second, 5m rappel took us down towards a narrow couloir, while a 2m jump marked the end of our adventure.

The descent is nice and the slope is uniform, but there’s some exposure, too. A line has been skied on the east face, but we have no information about the line we skied on the north face; it might be a first descent. Marco and I proposed 5.3 for technical difficulties and E4 for exposure.

15.05.2018
Sébastien de Sainte Marie skis steep Swiss trilogy
36-year-old Swiss steep skier Sébastien de Sainte Marie reports about an interesting trilogy of steep ski descents between Davos and Arosa: West Face of Schiesshorn (2605m) and Tiejer Flue (2781m) on his own, and the North Face of Chüpfenflue (2658m) with Michal Dzian. These descents came about thanks to the 'exceptional winter' and while it is unclear whether they are first descents, they are certainly very rare indeed.