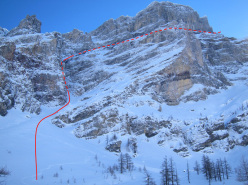 Pilatus North Face 500m 5.3 E4
In November, while having a coffee down by the lake in Lucerne, I noticed a nice looking line on the north face of Pilatus. Could it be skied? Recently, Seb and I went to have a look. It was very foggy so the pictures are unfortunately not that great. We ascended the entire line - the key to the face was an exposed traverse along a narrow ledge – and right before topping out at the top-restaurant we got hit by some of the weirdest and worst spindrift I have ever encountered. It turned out to be from the snow blower on the tourist viewpoint. The worker was kind enough to take a break so we could ski down safely. Given that the line is visible from Lucerne - a town with a lot of talented skiers - it wouldn't surprise me if it has been skied before.

Dent Favre North Face 1100m 5.3 E4 2 rappels (Couloir à Olov)
Seb has a great eye for finding new ski lines and he invited me along to try the north face of Dent Favre. We started the day with a 250 meter skin from the lifts in Ovrannaz and then dropped in on the other side. The line starts with a long, beautiful and exposed traverse and then joins a "hidden" couloir. We had to do one short rappel to get in and one short rappel to get out of the couloir. From below we saw that at least the first one could have been circumvented.