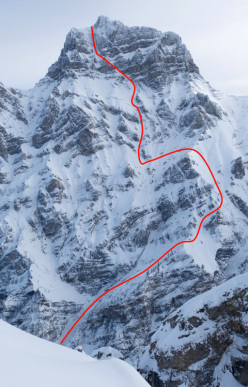 Three attempts is what Sébastien de Sainte Marie and Gilles Bornet required to ski the huge and complicated West Face of Grand Muveran last Saturday, after dropping together with Olov Isaksson from the tough 2000m approach via the north side. Much to their surprise, during their descent they discovered someone else's tracks... here's a funny story about a very interesting face. And also about a mountain which boasts an interesting skiing history: the North Face is said to have been skied as early as 1928 by the Müller brothers with wooden skis without edges!

As the name suggests, the Grand Muveran is big, but also a very complex mountain. Gilles Bornet had to make several trips up to the Col des Pauvres to scout out a skiable path through the massive west face. Last summer he even went up and climbed the grassy exit ramp using ice axes.

1st attempt, 2nd January: Traversing the west face. Gilles and I make a first attempt, but due to bad snow conditions and a thick fog we traverse the west face and exit on to the Frête de Saille.

2nd attempt, 16th February: Snow plodding. Following a big snowfall we try again, and our team is reinforced by Wim Pasquier. After 7 hours of breaking trail up waist-deep snow we’ve made good progress, but are tired. The sun is strong and is increasingly becoming a matter of concern. At 15:00, so close to the top, we decide that it is too dangerous to continue. The ski descent is marvellous but we have to be very careful of snow purging from the rock walls above. Back at the restaurant we are told that we have been observed in the face. A week later Wim receives a phone call from someone urgently asking for information about our attempt.

3rd attempt, 2nd March: The big surprise. Wim unfortunately cannot join, but we invite Olov Isaksson to come along. This time we decide to climb the north face and hope to drop in on the right branch of the top Y-couloir. The 2000 meter climb turns out to be more arduous than expected, but at 11:30 we have found the entry and start skiing. After a while we get a big surprise — ski tracks! Someone had used our old tracks up the face and had followed our exact itinerary. The tracks continued up the left branch. Somewhat astonished we continue the descent, but the conditions have greatly deteriorated compared to last time. We carefully continue in “survival ski mode”. We have a bad feeling about the exposed exit ramp and decide to avoid it by doing a rappel down to the ground. While setting up the ropes the ramp gets bombarded with ice and rocks — our intuition was right.

Down on the ground I’m happy about the great adventure the three of us have had, but I’m disappointed that we’ve skied this beautiful face in such bad conditions. In the end, it was still a great and memorable day in the mountains and I’m happy to have spent it in the company of two good friends.