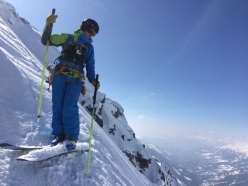 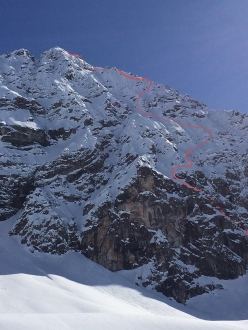 36-year-old Swiss steep skier Sébastien de Sainte Marie reports about an interesting trilogy of steep ski descents between Davos and Arosa: West Face of Schiesshorn (2605m) and Tiejer Flue (2781m) on his own, and the North Face of Chüpfenflue (2658m) with Michal Dzian. These descents came about thanks to the 'exceptional winter' and while it is unclear whether they are first descents, they are certainly very rare indeed.

I am originally from the French speaking part of Switzerland. For two years I moved to the German speaking part of the country because my girlfriend comes from St Gallen and works in Aarau. During those two years I discovered a giant new playground of crazy, long and steep faces to ski. While in western Switzerland some people ski steep faces influenced by nearby Chamonix, in eastern Switzerland I don't see that many people skiing steep and exposed faces.

This beginning of winter started with some great conditions and I was keen on finding out more about the beautiful mountains around Davos and Arosa. In mid-December I decided to enjoy one of these great powder days with a friend in Arosa. At midday however my friend injured his knee in an epic kamikaze fall, and we then began the long way back to the resort. During all this time one eye was on my friend, while with the other I scoped the gigantic West Face of Schiesshorn. On the way back with the mountain train I scrutinised two others epic faces, the North Faces of Chüpfenflue and Tiejer Flue, and that’s when my trilogy project came to life. In that moment there was no way I reckoned I’d to ski the three faces in almost two months!

I started the Sunday 28 January with the Schiesshorn West Face (2605m). It's a massif mountain just in front of Arosa. The key to this face is to find a way through the middle part of the cliff without having to make kilometers of rappels. I scoped a ramp system on the right of the face, and in order to check I needed to change my point of view, because when looking at the mountain head on it seems like vertical wall. I didn't climb the face, but instead made a fast turn around and easy skin up. From the summit it looked really nice and the top field offered great turns. This led to the ramp system, sometimes a bit technical and steep. I finished this section with one 20m abseil and a little 5m down-climbing, honorable. The last part is an easy couloir with a small jump at the end. A 700 m face with a technical difficulty I would say in the region of 5.2 and exposure at E3.

On Saturday 24 March, on my third attempt, I skied the Chüpfenflue north face (2656m) with my friend Michal Dzian. It's not the most technical of the three faces, but it's the one with the biggest uncertainties: at each attempt the whole top part went down under my skis, and on my third time I decided to go anyway. The slope is spilt in two parts, the top is very exposed and technical and the second is more "freeride". After my traditional start fear with avi, we crossed to join a nice couloir that led to a tricky 3-meter jump. 3 meters don't seem something special but it begins to be a bit less fun when the take-off is rocky; you need to gather speed, the landing zone is on a diagonal slope and the rest of the face opens out below your skis. After this experience we crossed the face to reach the evident line to reach safely and without any abseils we continued down to the base. The face is 600m high, technically 5.2 and exposure E3. The main difficulty is to find your way through the top section and find stable snow conditions! We didn't climb the face but reached it from Davos.

On Friday 6 April I skied Tiejer Flue (2781m), without a doubt the most technical and exposed face of this trilogy. It's just 550 m high, but technical and fully exposed at all stages. It reminded me a big of my descent of Männliflue last December. I had tried to ski this face with Adelin Favre and Michal Dzian in early January, but the snow conditions were too poor at the time. Nevertheless, I had taken in the great, impressive ambiance of this north face. From the top I couldn't head directly downwards, I had to traverse rightwards to get to the face proper, then the route made an S to slalom between the big cliffs in the middle section. It's steep throughout. The big problem though was the exit, a snow covered ramp, well "covered by snow" was my idea. The first section of the ramp was an icy crunchy snow field, but then the crux didn't allowed skis and obliged me to make one abseil and a tricky 20m mixed climb. I realized that this was no "picnic area". Maybe a bit earlier in winter it could have been skiable, but nevertheless with the risk of hitting a lot of rocks in the rest of the face. The rest of the exit ramp was skied easily, all I had to do was enjoy the view on this delirious descent that I’d grade technical 5.4 and E4 for its constant, maximum exposure.

After talking with the local freeski, mountaineering scene and guides it seems as if all three faces have never been skied before. Three first descents within 4 km from each other, in just two months is more than I could ever have dreamt of, especially after the last two winters plagued by my hernia and an little abseil accident.

So this is a bit of background information to my trilogy. For sure it's not named Nant Blanc or Triolet, but the difficulties and exposure are similar. And for sure Eastern Switzerland still has a crazy potential for big ski descents.