The South Face of Mount Ethelbert in Canada, skied for the first time by Christina Lustenberger, Mark Herbison, Sam Smoothy on 05/03/2022
Photo by Jamie Tanner Photos

Christina Lustenberger, Mark Herbison, Sam Smoothy on the summit of Mount Ethelbert in Canada on 05/03/2022, shortly before making the first ski descent of the mountain's formidable south face
Photo by Jamie Tanner Photos 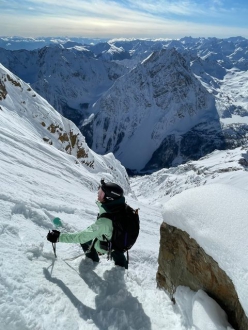 Christina Lustenberger making the first ski descent of the South Face of Mount Ethelbert in Canada, with Mark Herbison and Sam Smoothy on 05/03/2022
Photo by Mark Herbison 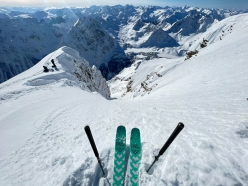 On 05/03/2022 Christina Lustenberger, Mark Herbison and Sam Smoothy made the first ski descent of the South Face of Mount Ethelbert (3180m) in the Purcell Mountains in Canada. The 45°, 1400m descent, was skied with just one short abseil.

Just like on their previous descent, the trio ascended to the summit via the west face. Having set off in the middle of the night, they reached the col in time to enjoy a beautiful sunrise, and topped out at 9:30 am in light winds and warm sunshine. "Compared to the -35°C summit last week this felt like the beach." Lustenberger explained.

Lustenberger, wh quested her first first ski descent in 2011, dropped in first "skiing the hanging couloir right off the summit. Carefully making turns over the exposure" to reach a point just above the cliff where she rigged an anchor while first Smoothy, then Herbison, joined her.

After a 30m abseil the trio then skied the remaining 1300m in "two long pitches, opening it up with some nice freeride turns." before regrouping at Surprise Lake and starting the long return home.

The undertaking was documented by Teton Gravity Research, Leslie Hittmeier and Jamie Tanner and Aaron Whitley, and a film will be released in due course.