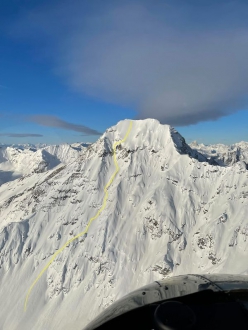 The East Face of Mount Ethelbert (3180m) in Canada, skied for the first time on 22/02/2022 by Christina Lustenberger, Mark Herbison and Sam Smoothy
Photo by Brodie Smith 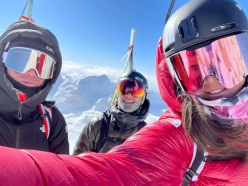 Alpinists Christina Lustenberger, Mark Herbison and Sam Smoothy have completed the first ski descent of the East Face of Mount Ethelbert (3180m) in the Purcell Mountains in Canada.

Lustenberger and Herbison had initially set their sights on the East Face last week but as soon as they reached the summit they were enveloped in cloud and after a two-hour wait they had to return via the mountain's West Face.

The weather forecast was ideal for Tuesday and the pair teamed up with Sam Smoothy, taking sleds to the Templeton lake trail head and then skinning through the valley to climb the west face once again. They were greeted by fierce winds when they summited at 13:30 and then rapidly skied the East Face without needing any abseils.

From the bottom of the face the trio skinned back up to the south face and skied a north couloir to return to their starting point. Their descent was documented by Jamie Tanner who was flown by helicopter to a ridge below the summit.

Commenting after their successful descent, Lustenberger stated "Frozen, but enjoying the Arctic sunset over the Columbia valley. What a magical day in the cold Canadian wilderness."

Lustenberger, a former World Cup alpine skier, has nailed an impressive series of first ski descents in recent times. These include the South Face of Mount Dunkirk (3030m) in the Rocky Mountains with Ian McIntosh and Nick McNutt and the striking East Face of Mount Nelson in March 2021 with Ian McIntosh, both in March 2021, as well as Gold Card Couloir with Brette Harrington and Andrew McNab and Mount Thor (1500m, 45-50°) with McNab one month earlier.