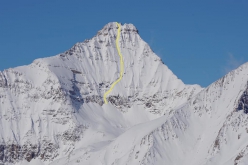 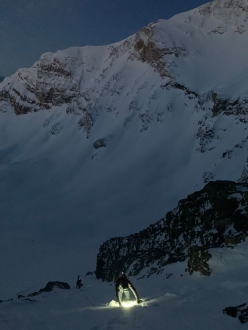 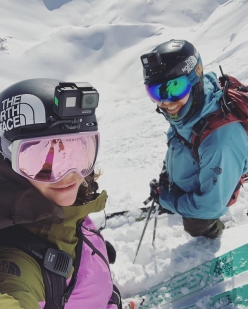 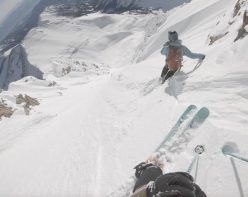 Mount Nelson in British Columbia, Canada, was skied on Thursday 4 March for the first time by Canadian alpinists Christina Lustenberger and Ian McIntosh via its iconic East Face. The prominent peak dominates the valley and can see be seen clearly from both Invermere and Panorama, where as children Lustenberger and McIntosh first learnt to ski together over two decades ago.

Despite the mountain being a popular summer scramble, the two had never climbed it before. They set off from the Toby Creek road at 1:45am and, after skinning into the night by headlamp, ascended the south face and reached the top at around 9am. They spent some time on the 3313m summit, then took a plum line for 750 meters directly down the East Face past sections up to 55° steep.

Their descent was followed via binoculars not only by the Panorama ski patrol and also by their parents, making the experience according to Lustenberger "pretty intense. Most big lines I ski are in remote valleys with no one watching... let alone our parents, film crew etc."

Talking to planetmountain.com after the drop, Lusti stated "We did it in such good style and great conditions... I’m so proud of what we did and how we did it. The town and community was absolutely buzzing after hearing about our ski descent... that was a really cool feeling."

The former alpine skier added "To look at this mountain our whole life and wonder could it be skied ... and to finally put it all together with an amazing teammate and ski partner Ian was an absolute dream come true. I think childhood dreams are the most pure and creative, so to put this together was magic! It's a day I’ll never forget."

Lustenberger made headline news at the start of February when with Brette Harrington and Andrew McNab she scored the first ski descent of the exposed Gold Card Couloir located between Mount Burnham and Mount Grady in the Monashee Mountains. Further first descents include the South Face of Mt Thor (1500m, 45-50°) with Andrew McNab in February this year, as well as the awe-inspiring west face of Mount MacDonald in February 2020.