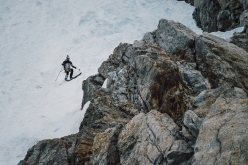 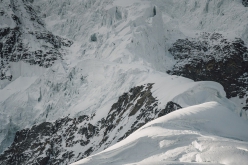 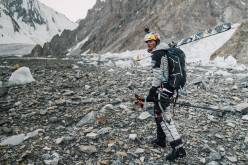 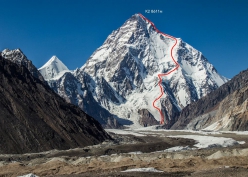 K2 and the line skied on Sunday 22 July 2018 by Andrzej Bargiel. From the summit the 30-year-old Pole followed the Abruzzi Spur, then plunged down the Cesen route before traversing below the seracs along the Messner variation and joining the Kukucka - Piotrowski line ascended in 1986. He followed this and added some new variations to complete the historic first ski descent of the second highest mountain in the world
Photo by Marek Ogień

The video of the historic first ski descent of K2, carried out by Poland’s Andrzej Bargiel on 22 July 2018.

The first ski descent of K2 carried out by Polish mountaineer Andrzej Bargiel understandably caused quite a stir and news of the 30-year-old’s run down the second highest mountain in the world made the headlines across the globe. Now a video has been released that is a must-see. Although there’s not much footage from the summit, it’s clear that the commitment is total. The images are outstanding, filmed with Piotr Pawlus and also with a drone piloted by Andrzej's brother Bartek. Watching the footage you really get the impression of being up there, descending laboriously towards base camp, alone with in Andrzej, up in K2’s thin air.

09.08.2010
Fredrik Ericsson, fatal accident on K2
On 6 August Fredrik Ericsson fell to his death from the Bottleneck on K2. The Swedish alpinist was climbing with Gerlinde Kaltenbrunner from Austria who descended safely to Base Camp. Kaltenbrunner's husband Ralf Dujmovit provides the details about the accident.

24.06.2009
In memory of Michele Fait
On 23 June the Italian mountaineer Michele Fait lost his life skiing from Camp 2 on the Cesen route on K2.