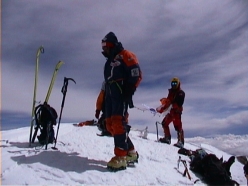 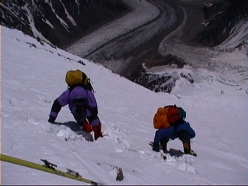 K2: on the Cesen Route at about 7700m
Photo by archivio Jean-Christophe Lafaille 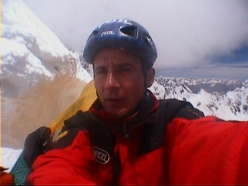 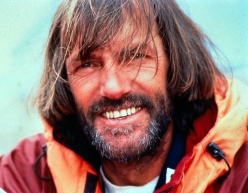 The news is one of those that one always likes to hear: Hans Kammerlander and Jean-Christophe Lafaille reached the summit of K2 on 22 July. More importantly, they are now safely back in Base Camp at 5000m. This is Kammerlander's 13th 8000m peak, while for Lafaille this is his 7th.

The adventure on the second highest mountain in the world started about three weeks ago with the ritual acclimatising stage up and down the mountain and the habitual forced rests due to bad weather. During this period the two decided to climb the Cesen route together. Climbed in 1986 by the Slovenian Tomo Cesen, the route takes a line up the South Face of K2 to the shoulder at 7800m, to the left of the classic Abruzzi spur, first climbed in 1954 by an Italian expedition led by Ardito Desio.

The following is an account by Sigi Pirchner of the final stages of the ascent after the most recent telephone contact with Hans Kammerlander:

They depart on Friday 20/01 at about 5.00 am and are immediately confronted with a “minor” problem: an enormous avalanche in the gully that leads to the start of the Cesen route destroys all the gear deposited at about 5300m for the ascent. And to think that Kammerlander, trying K2 for his third consecutive time, used to have his Camp established there…

The alpinists return to Base Camp therefore for more equipment and set off once again. They reach Camp 1 at 7000m and spend the night there before proceeding to Camp 2 the next day at about 7900m.

On Sunday 22 July they set off for the summit and confront the famous bottleneck at 8400m that leads to the final 200m beneath the summit. Hans and Jean-Christophe find themselves buried waist-deep in snow and manage to ascend just 50m/hour! They finally reach the summit at 8611m, as do two other Korean alpinists, two Spaniards and two Sherpas via the Abruzzi Spur.

Kammerlander, who has carried his skis from Camp 2, is intent on skiing from the summit and begins his difficult descent through the clouds for about 400m. Then, to his horror, he witnesses a scene that occurs with terrible frequency on what is considered the most beautiful and dangerous of all 8000ers: one of the Koreans falls to his death whilst descending through the bottleneck. Hans can do nothing to help and decides that he’s had enough. So he stops his ski descent, also out of mark of respect for the tragedy.

After spending another night at Camp 2 Lafaille and Kammerlander descend via the Cesen route, dismantling their camps and bringing them back down to valley. This is definitely worth underlining.

Both Kammerlander and Lafaille will now return home, extremely happy after their successful summit bid in such difficult conditions. Lafaille
will not continue to Broad Peak as hoped as he has not been granted permission. He did however receive the highest praises from Kammerlander, who compared the Frenchman to his old climbing partner Friedl Mutschlechner. For those who know Kammerlander, this is the greatest appraisals and recognition a man and alpinist can receive.

Their ascent of K2 is a great achievement. Congratulations.

K2 (8611m) is the second highest mountain on earth. Situated in the Karakorum, on the border between Pakistan and China, it was first climbed on 31 July 1954 by the Italians Lino Lacedelli and Achille Compagnoni, led by Ardito Desio. It is considered the most beautiful, hardest and dangerous 8000m peak.