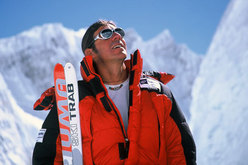 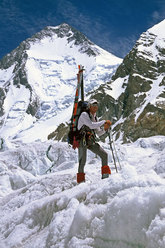 In memory of Michele Fait

On 23 June the Italian mountaineer Michele Fait lost his life skiing from Camp 2 on the Cesen route on K2.

Michele was a good man. This was my first thought when, this morning, it was confirmed that Michele Fait had fallen to his death between Camps 2 and 1 at roughly 6400m while skiing down the Cesen route on K2. His skis slipped on a sheet of ice and then hit some rocks, catapulting him down to the base of the wall. More than a thousand meters left no chance for survival. News of the tragedy was confirmed Fredrik Ericsson, the Swedish skier who planned to descend K2 together with Fait. The two mountaineers had spent a night at Camp 2 at circa 6400/6500m and had started their descent which then proved fatal for Fait. According to the latest news, the body of the Italian mountaineer has already been recovered and is in Base Camp.

While I heard and registered this cold and terrible accident I couldn't help thinking: Michele was a good man and he had a dream. A dream which he desired intensely. Skiing down K2 with his skis was what he desired most, even if he knew it was an absolute achievement, an extremely difficult and aleatory world first. Nevertheless Michele said "it can be done" and, above all, he wanted to do it. That was all that was needed to light the fuse of this boundless passion.

Michele Fait certainly didn't come from nowhere. He was a skier with a curriculum of high class descents, such as Shisha Pangma 7900m, Gasherbrum II from 7800m and from some 6000m peaks in Perù, to which must be added numerous descents in the Dolomites and entire Alps. He had carefully prepared this project in the greatest detail, even finding out information from Hans Kammerlander who had courted this project for a long time and who in 2004 aborted his attempt just beneath the summit due to impossible snow conditions. Michele had been captured by that line in 2005, had attempted K2 in 2007 with the expedition K2 Freedom. At the time he had to turn back at 8300m and live with the painful loss of Stefano Zavka, one of his expedition partners. But his dream didn't stop, on the contrary, it continued even more vigourously.

So this is how his last adventure began. On 12 June he reached base camp together with Fredrik Ericsson. On 16 June, after having spent the night at Camp 1 at 6000m, the two skied back to Base Camp located at the bottom of the Cesen route. They then headed back up to acclimatise and establish Camp 2. The rest is the terrible epilogue which we know all too well.

What remains to be said is little, or perhaps loads. Michele Fait really was a good man, gentle, almost belonging to a different era. i don't want to ask myself the usual "why did it happen?" I cannot explain why mountaineers risk their lives. I no longer ask myself this question. All I know is that Michele could not have done without his K2. This, even if it might seem insufficient, suffices. Because Michele wanted that adventure more than anything else. It was unquestionably his dream, his project. he wanted to be there on K2 with his skis, and nothing in the world would have stopped him. Even if this cannot soothe the pain for his loss, what remains for us is to salute him and remember him like this, like a good man who loved the mountains so much he couldn't do without them.