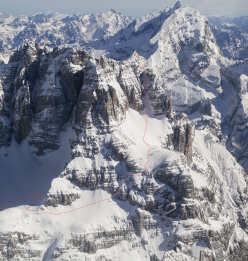 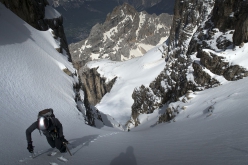 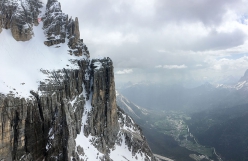 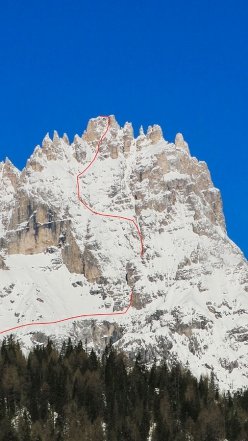 In recent years the quest to ski the last unskied 3000ers in the Dolomites resulted in Punta Piccola dei Tre Scarperi (3099m) and Piz Popena (3152m) in 2017. 2018 proved no different with new dreams being realised.

The first descent worth reporting was Punta dei Tre Scarperi (3145m): Vascellari pursued this line unsuccessfully for a few years, with conditions prohibitive during two attempts (first with Matteo De March and Giovanni Zaccaria, then with Loris De Barba). It was finally completing on 10 March 2018 with Davide D'Alpaos. However, careful research revealed a previous descent, carried out in 1999, by three mountain guides: Toni Obojes, Andreas Messner and Othmar Zingerle.

A dozen or so new descents across the Dolomites were carried out and culminated on 7 May, just as the ski mountaineering season was about to come to an early end, with the descent of Croda Marcora, via a line that is clearly visible in its entirety only from Punta Nera or from ridges above Mount Faloria.

The interesting sections of the route include the key gully that leads from the basin to the shoulder: imposing, steep and although not extreme (45°, one section 50°), a fall is out of the question as at the base there is a threatening rocky void overlooking the Ampezzo valley.

Even the long section above the gully offers no respite, neither during the ascent nor the descent, with extreme sections such as the short, narrow funnel and the steep, narrow hidden gully just below the summit.

Down below what looked like rocky cliffs turned out to be completely skiable, though steep and exposed, and these led to the Western Glacier of Sorapis, one of the few obvious remaining Dolomite glaciers. This is marked, in particular towards the end of the season, with characteristic features such as deep blue hues and some crevasses.

The result was a beautiful day of steep skiing, with some extreme skiing, and some fun moments such as crossing the thawing Sorapis lake (Vandelli), while the icy granita yielded below their skis, forcing them to move continuously; fun but threatening, this was necessary to to avoid the ice cold plunge. And finally the return in a developing storm, happy.

19.01.2015
First ski descents in the Dolomites by Vascellari, D'Alpaos and De Barba
Between February and May 2014, Italian skiers Francesco Vascellari, Davide D'Alpaos and Loris De Barba carried out a series of first ski descents to solve some old problems in the Dolomites. They concluded their run with a repeat of the East Face of the Matterhorn, first skied by Tone Valeruz in 1975.