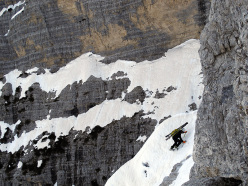 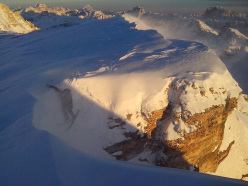 First ski descents in the Dolomites by Vascellari, D'Alpaos and De Barba

Between February and May 2014, Italian skiers Francesco Vascellari, Davide D'Alpaos and Loris De Barba carried out a series of first ski descents to solve some old problems in the Dolomites. They concluded their run with a repeat of the East Face of the Matterhorn, first skied by Tone Valeruz in 1975.

The Pale di San Martino group in the Dolomites were the first goal of the 2014 winter season for Belluno-based alpinists Francesco Vascellari, Davide D'Alpaos and Loris De Barba. The trio quickly skied some new lines (now published in the first ski guidebook to this group, by ViviDolomiti Edizioni) such as the sought-after North face of Lastei d'Agner (55°, some sections 60°), the East Face of the Spiz Agner (Vascellari solo, 60°), the South Face of Cimerlo (45°, the SW Face had already been skied), the Gemello del Travignolo gully (55°) and the beautiful North Face of Cima di Ball (with F. Rigon, 55°).

Making the most of exceptional conditions they also added some new descents to the d’Oltre Piave area of the Dolomites, skiing lines in the harsh environment such as Duranno and Cima Giaeda.

In the Zoldo Dolomites they skied a variation down Mounte Pelmo's Canalone dei Camòrz, hitherto unpublished: this follows the summer descent from La Dambra and is considered an improvement as it makes Pelmo more feasible since it avoids the major objective dangers (especially in winter) on the Ball ledge which had, up until now, been deemed the only viable descent.

In the Sella group they descended "Canale della Cornice", a new gully next to the famous Canale Joel. The slope is one the steepest in the massif (55° - 60°) and little is published about this gully gully due to the 50m abseil at the end that interrupts the descent.

While making these and other descents (at present considered probable, all to be published at the end of 2015 in Vascellari’s book dedicated to "unprecedented" ski mountaineering in the Dolomites), the skiers also retraced the footsteps of Tone Valeruz: long forgotten gullies in the Sella, Marmolada and Serauta groups (with D. Alberti and L. De Biasi) and Gran Vernel (with friends and fellow guides Alessandro Beber and Massimo Faletti), as well as the East Face of the Matterhorn. When they skied this line they were joined at the base by Lucio Trucco, President of the Cervino Mountain guides, a great friend and guardian of the secrets of this magnificent face.