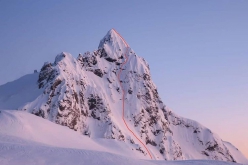 Colmillo Del Diablo in Patagonia and the line of Psyco Colmillo, skied by Christophe Henry and Juan Señoret on 17/09/2019
Photo by Cristóbal Clément Eller 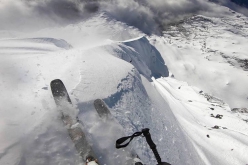 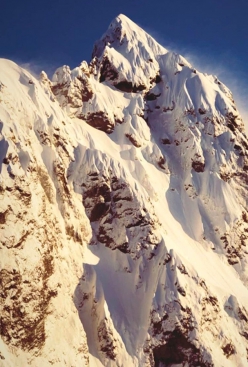 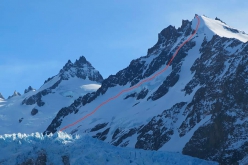 France’s Christophe Henry is currently on an extended skiing trip to Chile where he has scored a number of first ski descents, including Colmillo Del Diablo in Patagonia with Juan Señoret.

Christophe Henry travelled to South America in late July and kicked the expedition off in style with a run down Cerro Solo in Patagonia together with Raimundo De Andraca and Galo Viguera. This came about after a 50km approach and two days scoping the line through the glacier and below the serac. Making the most of a short weather window the trio also established a big new line down Cerro Electrico.

Probably the most impressive so far is the first ski descent of Colmillo Del Diablo, skied with local mountain guide Juan Señoret. The duo attempted the face about a month ago with Raimundo De Andraca, Aymar Navarro and Txema Trull, intending to ascend the face direct but were forced to retreat due to difficult conditions.

Henry and Señoret returned on 17 September, opting this time to ascend via the classic ridge route to the summit; after battling against strong winds they dropped in, skiing an exposed spine before making their way carefully to the couloir. Five short abseils were needed on what the Chamonix-based skier described to planetmountain.com as being "a really technical line." The line down the Devil's Fang been called Psyco Colmillo.

11.10.2012
Andreas Fransson and his extreme skiing in Patagonia
Interview with Sweden's Andreas Fransson who on 19/09/2012 made the first ski descent of the Whillans ramp on Aguja Poincenot, Patagonia.