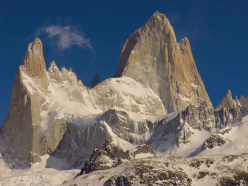 Aguja Poincenot, Patagonia: This is the image that personifies patagonia and the trip for me.. Poincenot and the ramp on the left..
Photo by Andreas Fransson 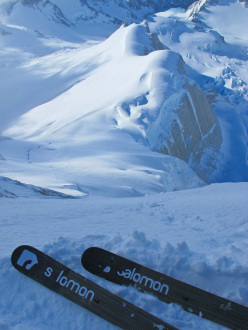 Aguja Poincenot, Patagonia: This is one of the few photos I took from the ramp... I was much more concentrated on skiing than taking photos that day...
Photo by Andreas Fransson

19/09/2012: Andreas Fransson during the first ski descent of the Whillans ramp on Aguja Poincenot, Patagonia.
Photo by Bjarne Sahlén 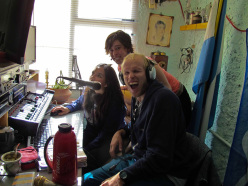 Andreas Fransson and his extreme skiing in Patagonia

Interview with Sweden's Andreas Fransson who on 19/09/2012 made the first ski descent of the Whillans ramp on Aguja Poincenot, Patagonia.

Last time we caught up with Andreas Fransson was back in July 2011 when the extreme skier had just made waves with his courageous first ski descent of Denali's inhospitable South Face. In the meantime the 29-year-old certified ski instructor and trainee mountain guide has been leaving his steep tracks across the globe but his recent ski - the awesome Whillans ramp on Aguja Poincenot in Patagonia's Fitz Roy massif - makes all these shrink in comparison. Fransson was accompanied by his skiing buddy Bjarne Sahlén to the Bergshrund and he then continued up the exposed ramp alone to make what he described as "one of the most challenging runs in my life". This is what he told us:

Andreas, first of all: why this line?
I’m always looking for special lines that stick out and when my friend Colin Haley pointed me to this one a few years back I got really interested in doing it. It’s an obvious line and he felt it was one of the most far-out steep descents in the world. Now, in retrospect, I think so, too. It’s steeper than anything I have ever skied before and it has the most extreme exposure you can imagine: it’s not a couloir, but an outward leaning ramp. It was definitely at the limit of what I can do.

So tell us about the ascent?
I got amazed on the way up by how steep it was. And then, about half-way up, there was only about 20cm of snow on the slabs and although this scared me out a bit, I knew it would be better with skis on than with crampons.

So the ascent itself proved taxing, too...
Yes, climbing up was a real mental fight as I knew I had to descend the same way, it really affected me and I felt like everything I have learnt so far in life would have to come together to pull this of. But the thing is, beyond this fear I always had the feeling that I could definitely pull this off and that’s why I kept on going. It became a test on how to cut through the illusions of fear and doubt. I suppose that’s why this descent has come to mean a lot to me.

How did you prepare for something of this magnitude?
Everything I have done so far, in terms of technical descents, had paved the way for this. Before I started climbing up the entrance couloir I had no idea that it was going to be so far-out. Had I known, well perhaps it would have been even harder still!

This may seem like a silly question, but you climbed and skied the ramp yet avoided the top. In extreme descents like these, how important is reaching the summit?
Hmmm, I think it depends. When it’s obviously possible to ski something from the summit, then I believe the line starts at the summit. But it would have been extremely contrived to climb to the top of Poincenot, then rap down a few hundred meters before starting the ski. I think the most important thing therefore is to be clear to oneself - and others if you play the media game - about what and how something has been done.

So tell us about this descent...
Well, the first slope was steep, with good snow, maybe about 50 degrees. Then came a steeper section that I sidestepped for a few meters, and then I skied some more. About halfway down the snow turned to icy crust and I had to hit my pole to make steps in the snow. This also happened to be the steepest section. After that it was easier, but still really steep. I was so exhausted mentally when I got to the easy snow that I clipped myself to an anchor I'd found on the way up. I took out the rope and rappelled, max 10 meters down easy snow. At this point I was really over it. But then as I realised that it was much, much harder higher up I stopped, put the rope in the bag, and kept it together to the bottom.

What's your state of mind? 100% lucid? Or perhaps in a sort of trance?
I think you could call it that. For me it’s simply enough to say I’m fully concentrated on what I’m doing. That’s it: the mountain demands everything from me, and I have to give everything I've got to her, otherwise she won't let me come out the other side.

Risks...
Of course, as always when you are steep skiing you risk your life. But I wouldn’t have done this had I not had complete faith in myself that I'd be able to pull it off. This is obviously very subjective and I don’t think you can talk statistics here. Either you do it, or you don’t. For my entire skiing life I've been searching for a line that would demand the absolute best of me and now I found it. I don’t need to go there again. Now its time for other objectives.

So what do you look for in your descents?
I want a challenge of some sort. A beautiful line is difficult to find, so that in itself is a challenge. It can be really steep, that’s also a challenge. Or it can be long, remote, guiding a friend or even skiing something easier in good style. I like challenges and they always give me something back.

We know you had a pretty serious accident a while back…
Yes, one could say I went to the other side and came back. I think it all comes down to your life philosophy what you want to make out of it. I’m happy for what I have now and that I’m able to do the things I love. In the hospital bed after the accident I could really feel the importance of living one’s life fully. This is my way of doing just that. Having said that, I have to admit the question of changing my life to follow other dreams accompanies me every day.

Denali and Whillans, two apparently completely different challenges… or perhaps not?
They were both really big challenges in their own ways. The means of doing them were very different, but both of them became a realization of a dream; a dream I knew from the start I could realize, but with loads of illusions to cut through on the way there. In that sense both have helped me to shorten the gap between vision and reality.