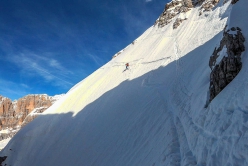 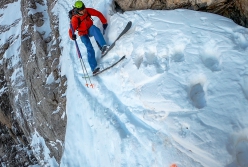 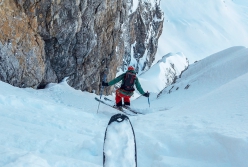 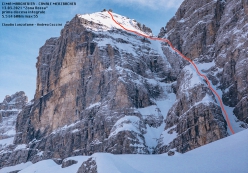 The line of the integral descent of Cima Margherita - Canale Merzbacher in the Brenta Dolomites, first skied by Andrea Cozzini and Claudio Lanzafame on 13/03/2021
Photo by Claudio Lanzafame

The report by Andrea Cozzini and Claudio Lanzafame who on 13 March 2021 in the Brenta Dolomites made what is likely to be the first complete ski descent of Cima Margherita face and the Merzbacher gully.

"It's absolutely stunning today" exclaims Andrea, as clear skies and cool, crisp temperatures welcome us once we cross the long Val Brenta and leave the dense vegetation behind us.

It's the 13th of March, we set off at 07.15 with our skis from Pra' de la casa. It's going to be a long day but the weather is on our side, dusk in the early afternoon is now a distant memory, we no longer need to set off all too early, at least, not today. Spring is in the air, the days are growing longer and the rhythm of our adventures becomes slow and calm.

Today's goal is Cima Margherita, an elegant rocky peak that rises between Cima Tosa and Cima Brenta Bassa, and the North Couloir of Bocca Margherita. First ascended on 27 July 1885 by Gottfried Merzbacher and Bonifacio Nicolussi, this is more commonly referred to as the Canale Merzbacher.

In the past these two sections were skied on two separate occasions, namely by Silvestro Franchini who in 2014 descended the Merzbacher gully, and by Luca Dallavalle, his brother Roberta and the late Andrea Concini who on 26 February 2017 skied the Margherita face to the saddle where the couloir begins. No one had linked the two and we planned on skiing this beautiful line in one from, from the top of the mountain to the bottom of the gully, ideally without ever taking our skis off and without resorting to any abseils.

The patience we demonstrated over the years finally reaped its rewards and today both the face and the gully are in perfect condition, enabling us to be make a successul descent. As we approach we realise that the snow is very wintery, fortunately it hasn't been blown away by the wind or transformed by warm spring temperatures, and we hope that it'll be like that at the top and on the most exposed sections

We summit at around 12.30, have a bite to eat, get ready and drop in to the first part of the descent, a large 45/50° face which allows us to test the snow conditions and find our rhythm as we make our first curves.

The crux sections during the the descent are the traverse that links the two sections, and the narrow, exposed part of the gully with its hundred-meter drop into the void below. Especially on the hard-packed snow this part in particular leaves no room for error, a fall is out of the question. Each curve must be considered carefully and carried out with absolute calm and precision.

The only problem could be some rocks, hidden below those 15/20 cm of power snow, so we ready ourselves carefully, planting our poles before each curve, almost as if feeling the snow below our skis, and then we descend lightly, let rip and finally enjoy this perfect snow!

The overall sensations are good, we decide to keep our rope stashed in our rucksack. We sideslip a short section, where curves would simply be way too dangerous...and once the gully widens and becomes safe we release the tension and carve some wide curves, sucking in the air and whooping with joy! It's been a great adventure, we return home satisfied with what we've achieved and how it felt.

Skiing these "extreme" lines are the result of a desire that stems from the intrinsic beauty of these mountains, of their most logical lines (in winter on snow or in dryer seasons on rock), that are difficult to resist. There's nothing better than sharing these experiences with friends, and these moments that will remain forever etched in our memories.