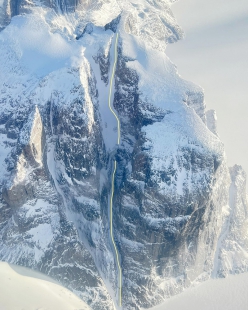 On 4 May 2022 Brette Harrington and Christina Lustenberger made the first ski descent of Polar Moon (1200m, 45°) on Walker Arm, Baffin Island

Brette Harrington and Christina Lustenberger have made a remarkable first ski descent of a stunning, exposed 1200m line down Mt. Qulliqtaliujaq above Kangiqtualuk Agguqti, formerly referred to as Walker Arm, on the northeast coast of Baffin Island.

The mountain, located to the east of the famous Polar Sun Spire, was climbed by the duo via the south couloir, meaning that they skied top down and with no prior knowledge of conditions. At circa half-height the line is guarded by a 180m hanging serac which was breached via a series of abseils, giving way to what Lusti describes as "a beautiful exit couloir out the bottom." The line now goes by the name of Polar Moon (1200m, 45°).

Commenting after the successful descent, Lustenberger stated "It was really nice to have my buddy Brette there. We have skied and climbed so much together, and have good flow.  I think this line is as technical and engaging as any other, but the difference is that Baffin is super remote, so it adds a level of exposure."

Harrington and Lusti formed part of a larger spring skiing expedition to the Sam Ford Fjord area which included Hilaree Nelson, Emily Harrington, Drew Smith, Jordan Manoukian, Mathis Dumas. The crew skied various different couloirs in the area and made a repeat of the world-class Polar Star Couloir on nearby Mount Beluga.