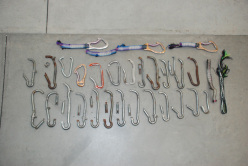 The gear that was tested.
Photo by archivio Emanuele Pellizzari 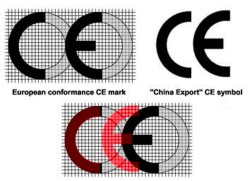 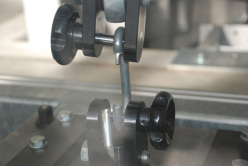 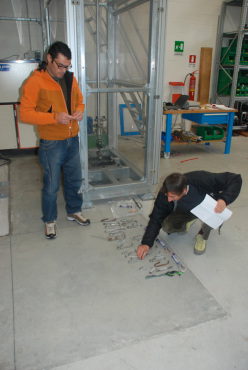 A sample of carabiners and quickdraws have been tested and analised by Emanuele Pellizzari at the Italian Mountaineering Club Gear and Techniques laboratory at Taggì di Sopra, Villafranca Padovana, Padova, Italy.

Over the last 14 months I've collected enough carabiners used as lower-offs at belays to make a sound statistical analysis with the aim of drawing some conclusions about their breaking strengths. I began collecting them after a carabiner which I'd removed from a belay "opened" at 920 daN (a metric unit equivalent to circa 1 kg). The carabiners were tested at the Italian Mountaineering Club Gear and Techniques laboratory.

Logic and common sense tell us that the most important piece of gear on a single pitch sport climb should also be the strongest. But evidence seems to indicate the opposite; or rather, the most important safety point, such as the carabiner used at belay stations, is by far the worst carabiners of all. For example, I've found crabs which could only be sold in Europe if they had been marked "not for climbing".

The gear I collected at the crags can be split into two categories:
- those for "climbing" and for "hardware"
- another category of "fixed" gear, namely complete quickdraws (with or without maillon rapide).

Carabiners first
Carabiners designed for climbing are marked with the name of the company, the breaking strength and, if produced after 1995, the "CE" logo followed by the certification laboratory. The CE symbol stands for Conformité Européenne, or European Conformity and indicates that the product conforms to some essential requirements of specific directives. As such it is not a quality hallmark nor a hallmark of origin, instead it means that the product offers a "presumption of conformity". Or rather, one presumes the product conforms to the specific norms. The European directive 93/68/CEE which entered into effect on 30 June 1995 is what interests the alpinism/climbing sector as this determines the essential requirements of products used in industry, or mountaineering, to avoid the consequences of a fall. As of this date it has been illegal to produce and/or sell DPI (Individual Protection Devices) which are not marked "CE" . The tested carabiners were predominantly made of aluminium. The minimum breaking strength for connectors is 20 kN; the standard is 24/25 kN.

Ironware from hardware shops tends not to be marked with much information; made of steel, this hardware does not contain indications about breaking strength nor the name of the producer. At times they have a generic CE marking (stamped in capital letters) or a "ce" which stands for China Export.
This type of carabiners - and "hardware" maillon rapide - are neither "CE" nor DPI (Individual Protection Devices) products. It's interesting and important to read what is published on Wikipedia regarding the differences between the logos.

The factual evidence can be summed up as follows:
- Every "hardware" carabiner sucks, to say the least, whether they are new, old, regardless of their shape, type, width and where they were bought in Italy. All, apart from one, open on average at circa 1200 daN (kg).
- Every "climbing" carabiner, even the oldest, most used and worn, is better than the best new "hardware" carabiner. And even if really worn, they fail close to the stated breaking strength; this is almost twice as much as the average "hardware" carabiner.
- Often the abseil carabiner on a single pitch sport climb (which therefore becomes the only anchor) is far and away the worst carabiner in a climber's gear kit. Often even failing, with a closed gate, at loads which are less than a "good" climbing carabiner with an open gate.

The quickdraw have breaking strengths which vary between 800 - 1800 daN and much depends on how worn they are and how much they have been exposed to water and sun. It's therefore impossible to create a trustworthy statistical analysis as there are too many variables: to find out more check out previous studies about aging effects on ropes and slings, the role of UV rays, water and ice.
In short though, a sling which has been exposed to elements is certainly weaker than a piece of gear which is in good condition. How much? Even more than twice as weak.
This test about "fixed" gear breaking strength should not be confused with the new problems which have emerged regarding sharp edges which can form on carabiners when bolts are used incorrectly and which have already resulted in some accidents (one of which mortal).

Conclusions
For a long time climbers have top-roped routes and lowered-off using "hardware" carabiners. Probably we will continue to do so for a long time still: there are so many connectors out there that substituting them all immediately is simply not plausible.
The loads generated on single pitches and at belays are unlikely to be so high as to break these carabiners. Having said that, when top-roping it is best to add your own carabiner.
It is important to note that "hardware" carabiners are the worst carabiners a climber / alpinist can clip to his or her harness. They couldn't even be sold unless marked with "not for climbing". I'll repeat the concept: even an old, worn "CE" carabiner is better than a new "hardware" carabiner.
The same holds true, though less seriously, for non "CE" maillon rapides.
And finally, if in doubt, every piece of fixed gear is weaker than your worst quickdraw.