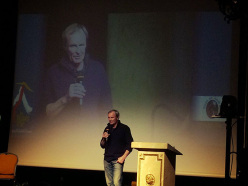 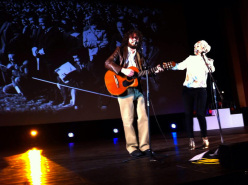 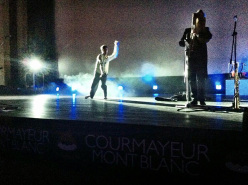 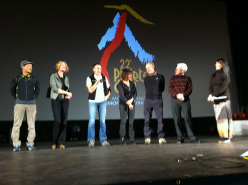 This evening at 21:00 at Courmayeur the award's ceremony of the Piolets d'Or 2014. All updates on twitter.

The most important moment of the Piolets d'Or 2014 is about to begin. After two beautiful days of alpinism at Chamonix and Courmayeur, at 21:00 the award's ceremony will be celebrated at Courmayeur's Cinema Palanoir. America's John Roskelley will receive the Lifetime Achievement Award, while the 2014 winner - or winners - will be announced during the evening presented by Kay Rush that includes music by L'Orage and Naif, the exhibiton by Marco Chenevier directed by Vinicio Stefanello. For all updates follow the twitter hashtag #Piolets14.

Kunyang Chhish East, 7,400m (Pakistan)
The Kunyang Chhish still has virgin summits and the east peak had been the object of several previous parties. After two attempts defeated by storm, Simon Anthamatten (Switzerland), Hansjörg and Matthias Auer (Austria) climbed the 2,700m mixed Southwest face in six days, two of which were spent trapped at 6,700m by foul weather. The corniced summit ridge, with its baroque architecture, proved spectacular.

K6 West, 7,040m (Pakistan)
K6 West has also been the target of several previous attempts. Canadians Raphael Slawinski and Ian Welsted first had to climb through a complex and dangerous icefall to reach an elegant ice/mixed line on the Northwest face, which led in turn to the crest of the upper west ridge. The pair took five days to reach the summit, gaining 2,700m of vertical height above base camp. A further day was needed to descend the route.

Annapurna 8,091m (Nepal)
The South face of Annapurna has been a high altitude forcing ground for progressive Himalayan climbing. An alpine style ascent of this face was completed as early as 1984. In 1992 Pierre Béghin and Jean-Christophe Lafaille tried a route to the right of the 1970 British south pillar, reaching above 7,300m. Retreating from this point in poor weather, Béghin fell to his death. Ueli Steck (Switzerland) completed this route in a 28-hour round trip (8-9 October) from an advanced base beneath the ca 2,700m wall, climbing up and down the top section at night to escape strong daytime winds.

Mount Laurens, 3,052m (Alaska)
This isolated icy giant is situated on the Lacuna Glacier, south of Foraker. Mark Allen (USA) and Graham Zimmerman (USA/New Zealand) took two days to get to the base of the peak from their drop-off point, and then succeeded in making the first ascent of the northeast buttress and north ridge. They reached the summit after two bivouacs, for only its second ascent, negotiating unprotected climbing around large gargoyle cornices. Their ascent, and subsequent descent via the east face, was completed in a total of 67 hours from 20-22 May

SPECIAL MENTION
Annapurna 8,091m (Nepal)
From 16 - 24 October Stéphane Benoist and Yannick Graziani (France) also climbed the South face, following, with variants, the route climbed by Ueli Steck. The descent proved taxing with Stéphane suffering from a lung infection. The 2014 Piolets d’Or Jury has singled out this adventurous climb for a Special Mention, especially for the team spirit that forced a successful conclusion.


THE 2014 JURY
George Lowe (USA) was born in 1944. He started climbing in California at the age of 18. His mountaineering career extends over more than 40 years. His most famous ascent is the 1978 attempt on the northern ridge of Latok 1 (7145 m.), in Pakistan, together with his cousin Jeff Lowe, Jim Donini and Michael Kennedy, which stopped short of the summit of 150 m. The performance has not been matched since and the ridge remains untouched. From the long list of his achievements Lowe frequently mentions the adventure on the Nose (El Capitan, Yosemite) with Alex Lowe, accomplished in one day in 1991, or Grand Teton in 1980 with his father, George Jr, and his son, George IV. The physicist and mountaineer also climbed famous new routes in Alaska, notably on Mount Hunter and Mount Foraker.