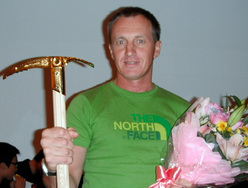 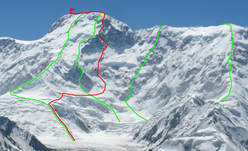 Take two! Denis Urubko has just repeated his 2009 success and doubled his takings by winning the Piolet d'Or Asia for the second time for the route established last August on Pik Pobeda. He raised the golden ice axe - awarded to the best Asian mountaineering undertaking - together with Gennadiy Durov and their summit was the crowning moment of a dream Urubko had touted with for almost twenty years: he had scoped the dangerous and ambitious line up the immense mountain in Kirghizistan's Kokshaal Too mountain range along with Simone Moro back in 1993. The route is called Dollar Rod, is marked by a difficult and extremely dangerous lower section, and was climbed in 6 days and graded 6b, the highest on the Russian grading scale. Obviously the route was climbed in extremely lightweight, alpine style up the 7439m high mountain which, given its latitude, is no less fearsome than the world's hardest 8000m peaks.

With this second Piolet d'Or Asia, after his 2009 success for the new route up Cho Oyu together with Borish Dedeshko which also netted them the "classic" Piolet d'Or, Urubko adds another chapter to his great mountaineering story. This includes all fourteen 8000ers, three of which via new routes (Broad Peak in 2005 with Serguey Samoilov, Manaslu in 2006 with Samoilov once again and Cho Oyu in 2009 with Borish Dedeshko), as wall as the two great first winter ascents, Makalu in 2009 with Simone Moro sul Makalu and Gasherbrum II this year with Moro and Cory Richards. And this story about an ace mountaineer will continue in winter, once again with Simone Moro and Cory Richards, as the three now have their sights set on the first winter ascent of Nanga Parbat.