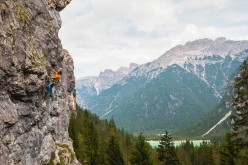 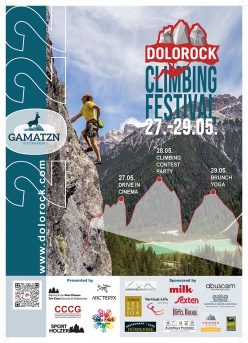 The traditional Dolorock Climbing Festival will take from 27 to 29 May 2022 in Höhlensteintal, Dolomites, Italy
Photo by Daniel Rogger 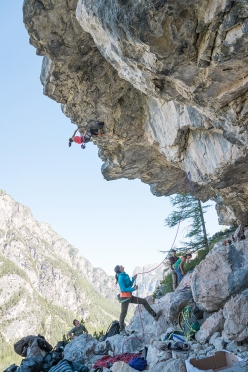 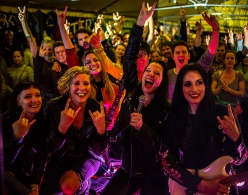 From 27 to 29 May 2022 the 9th Dolorock Climbing Festival will take place in Val di Landro, Italy. Open to all, this is the biggest climbing meeting in the Dolomites, located a stone’s throw from the Tre Cime di Lavaredo.

The countdown to Dolorock 2022 has begun and, up in the Landro Valley, the organisers are adding the finishing touches to what promises to be another great climbing meeting in the Dolomites. After its debut in 2013, this year the festival celebrates its ninth edition - the 2020 event had to be postponed due to Covid - and now interest in the event has returned to pre-pandemic levels. Only a handful of the 200 spaces are still available for Saturday's Redpoint Fight and registration will remain open online until Thursday evening; should tickets still be left, it will also be possible to register on Friday evening at the drive-in cinema at Toblach or directly on Saturday morning at Lake Landro.

The Dolorock meeting is based on its tried-and-tested formula: a climbing meeting open to everyone, with the beautiful Tre Cime di Lavaredo and the turquoise green waters of Lake Landro in the background. The program officially kicks off at 9.00 pm on Friday, at the Nord Arena at Toblach. This will host the drive-in cinema: just park the car, tune the radio to the right frequency, sit back with popcorn and beer and enjoy the three climbing films!

Saturday morning things begin in earnest with the briefing at 9:00 at the restaurant at Lake Landro, a good coffee and Apfelstrudel and then, from 10 to 17, the classic Redpoint Fight. This is a non-competitive competition, if that makes sense, with few very simple rules: each route has a score, and the 5 most difficult routes climbed from 10 to 17 are decisive for the evaluation. The categories are: U14, U18, Masters and 50+ , both male and female. There are also 3 prizes up for grabs for those who climb the most routes, regardless of their grade, and there is also the "average value" category where the winner isn’t he or she who has the best score, but the climber who gets closest to the mean value. The winners will be revealed at Toblach at 7:30 pm during the awards ceremony, immediately before the Dolorock Party.

Sunday is a day of relax with the climbers brunch from 8:00 to 10:30 at the Dolorock tent and, for those who want to, Yoga for climbers which starts at 11:00. And of course there’s plenty of climbing, on more than 300 routes in the valley ranging from 4c to 8c+. In short, there’s something for everyone.

Dolorock Climbing Festival
Organised since 2013 by Gamatzn, the South Tyrolean climbing club that brings together climbers and mountaineers of Val Pusteria, Dolorock aims to use climbing to overcome linguistic, cultural and geographical barriers. The meeting is designed welcome diversity, promote tolerance and nurture critical discussions on issues related to climbing and mountaineering

21.07.2021
Dolorock, a wonderful climbing experience in Höhlensteintal, Dolomites
There are 10 days left until the end of Dolorock, the climbing festival in the Höhlensteintal / Valle di Landro in the Dolomites.

29.05.2019
Dolorock Climbing Festival 2019 registers record numbers despite rain
Bad weather did not stop the 7th edition of the Dolorock Climbing Festival which welcomed a record number of climbers. Organised by the ‘Gamatzn' climbing club, the meeting took place from 24 to 26 May 2019 at Sexten and in the Höhlensteintal in the Dolomites, close to the world famous the Tre Cime di Lavaredo, and once again it was an important moment for sport and culture