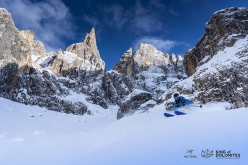 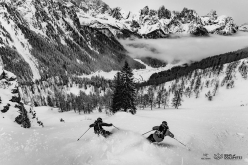 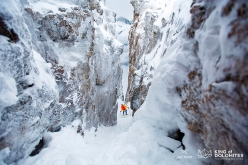 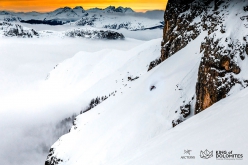 From 21 - 24 February 2019 San Martino di Castrozza (Dolomites) will host the seventh edition of the Arcteryx King of Dolomites, the international photo contest to shoot the most beautiful freeride photo of the Dolomites.

Expectations are high for the 2019 edition of Arc'teryx King of Dolomites thanks to the abundant snowfalls that hit the Dolomites at the start of February. This year the contest has been renewed with a new format that is bound to please photographers, riders and skiers who travel across the world to take part in this unique event oat the foot of the Pale di San Martino massif.

No more OPEN and PRO categories, but instead one single category within which each team will battle it out to be proclaimed King of Dolomites 2019: this is the big news of the seventh edition of the most famous Freeride Photography Contest of the Dolomites, that will take place as usual in San Martino di Castrozza between 21st and 24th February.

To make things even more interesting, the contest reintroduces the 4-theme formula tested successfully in 2016. A best photo will be selected for each theme with an overall prize of 4500 €, and the possibility of winning within all the categories, as if they were sort of “Freeride Oscars”.

Once again the photo contest was preceded by a Qualifying Stage, with more than 30 high quality photos taken across the Dolomites and published using the hashtag #KOD2019QS. The photographer Ruggero Arena won the Qualifying Stage with his shot of rider Stefano Lorenzon, taken in the Travignolo area on the Pale di San Martino. He and his team are now in the running for the Grand Finale of the King of Dolomites 2019.

A huge number of events have been lined up and these include gear testing as well as the traditional photography exhibition in the centre of the town with all the winning photos of the previous editions. Also, there’ll be plenty of fun at the Arc’teryx KOD Party ob Saturday evening, hours before the crowning ceremony of the new King of Dolomites, which will take place on Sunday afternoon in the centre of San Martino.

Once again Arc’teryx is main sponsor of the event, confirming its dedication in bringing forward the event, dedication that never lacked also from the local partners such as ApT San Martino di Castrozza e Primiero, flanked by the Ski Area San Martino - Passo Rolle and the sponsors Forst and Elle-Erre Easy Flag. The event is also supported by two important new entries, Roxa - Italian Ski Boots and Movement - The Freeski Company.

01.03.2015
King of Dolomites video
The video of King of Dolomites 2015, the photographic contest to take the best freeride shot of the Dolomites, won at San Martino di Castrozza by Guy Fattal from Israel.