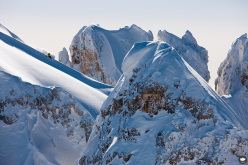 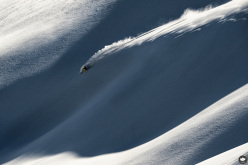 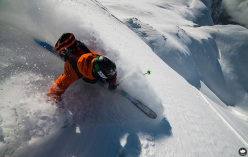 Wannabes: 2 I Krumiri
Photo by King of Dolomites 2014

Surrounded by the majestic peaks of the Pale di San Martino range, the hidden Italian freeride paradise San Martino di Castrozza presented the perfect playground for skiers and photographers looking for the most outstanding freeride scenery.

Unlike in the Northern part of the Alps, this winter has brought vast amounts of snow to Trentino and it dumped even more powder on the second day of the competition.

17 Arc’teryx athletes were available for the professional photographers to ride with, and many more pros joined in. Photographers and athletes from all around the world met in San Martino: from the US, Canada, France, Norway, Sweden, Holland, Germany and the hosting nation Italy. They saw the same conditions and rode in the same area, but the results were all unique. Each photo embodied the individual riders’ and photographers’ styles – and all of them were breathtaking. The amateur categories “Wannabes” and “Wanna-Babies” had sparked ambition bringing team to do ski tours at night or take shots from a remote-controlled drone. The best images from the three categories were judged by a group of journalists and sports business professionals. They had a hard time deciding with such a top selection of top level images. The winners were awarded with prize money and equipment.

200 participants met in San Martino for the KING OF DOLOMITES that almost doubled last year’s pioneering crowd. And they all want to come back!