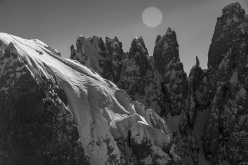 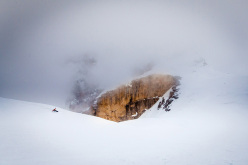 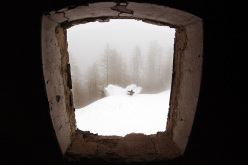 Guy Fattal from Israel, ahead of Lucas Swieykowski and Alex Buisse has won the third edition of King of Dolomites, the photo contest to shoot the most beautiful freeride photo of the Dolomites.

A truly sparkling third edition of the King of Dolomites this year that, despite the by far less favourable conditions compared to past years, has given all of its participants three days of snow, photography and fun at the feet of the always stunning Pale di San Martino peaks. This year too, 13 Photography Teams and Professional Riders took part in the event in the Pro category, while 108 participated in the Wannabes open category. The numbers have been increasing year after year, confirming the King of Dolomites as one of the photography and Freeriding events not to be missed during the winter season.

A colourful and excited crowd gathered in downtown San Martino yesterday afternoon in front of the mega-screens of the prize giving ceremony to await the final verdict of the judges, while the setting sun coloured the Pale di San Martino glazed in white. The jury panel, made up this year by Stefano Vegliani, Emilio Previtali and Riky Felderer, had a hard time in choosing the best shots taken on Friday and Saturday by the Pro Teams and Saturday and Sunday by the Wannabes, but the selection finally crowned as winner of the third edition the Team consisting of the Israeli photographer Guy Fattal and of the riders Dorian Konrad (immortalized in the winning picture) and Lukas Steger with a beautiful composition showing a rider in action in front of the peaks of the Pale di San Martino that form in the background a crown of mountain peaks of incomparable beauty, creating a fairy tale-like atmosphere. Second place was assigned to Stefan Schlumpf with a picture by Lucas Swieykowski, and third place to Alex Buisse with a photo portraying Paolo Marrazzi. The Jury’s special mention prize went to the Canadian photographer Zoya Lynch for her picture that plays magnificently with light and shade.

The Wannabes’ pictures were of very high level too, despite the less favourable weather conditions of Saturday afternoon and Sunday morning, managing to create some truly interesting material. In first place this year we find the team led by Diego Caldieraro, while second place goes to the photographer Maurizio Fasano with a picture of Vittorio Trinca Colonel. Third place goes to the local Alessandro Pianalto with a picture of Andrea De Pedrini, and several special mention prizes go to the Team “Moustache Indipendent”, headed by Simone Barberi, and to the Team of Andrea Salini. The prize for the best photo uploaded to Instagram with the hashtag #KOD2015 was assigned to Giulia Monego, who portrayed the frozen beard of her team mate Bruno Compagnet.

This year saw the confirmed success of the KOD Village at Alpe Tognola too, made up in Saturday and Sunday by a dozen Test tents that allowed pundits to try out the latest off-piste skiing materials. Not as well attended, unfortunately, the Freeride Safety Workshop organized on Sunday morning at Alpe Tognola, due to the no-show of several candidates because of the adverse weather conditions. It was however an interesting educational occasion for the younger pundits of off-piste skiing. To close the event in style once the sun had set there was great participation in the party evening organised by Arc’teryx at the Dolomites Bar Ranch on Friday and at the Scarpa Mojito Party on Saturday, during which the new boot Freedom RS, winner of the ISPO Awards 2015, was presented.

Summing things up, the result is absolutely positive for this third edition. This confirms the event’s originality and spectacularity in a natural setting featuring great charm and extraordinary beauty. Enormously satisfied were also the event’s organizers and sponsors who with their support made this edition truly unique and unforgettable.