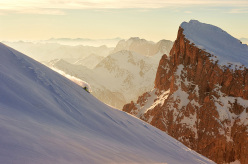 The video of King of Dolomites 2015, the photographic contest to take the best freeride shot of the Dolomites, won at San Martino di Castrozza by Guy Fattal from Israel.


26/02/205 - Guy Fattal wins King of Dolomites 2015
Guy Fattal from Israel, ahead of Lucas Swieykowski and Alex Buisse has won the third edition of King of Dolomites, the photo contest to shoot the most beautiful freeride photo of the Dolomites.