The crag Oliana in Spain after the wildfire that devastated the area on 19/06/2022. 'Apocalyptic scenery. Thank god, no one was hurt and the firefighters have done an amazing job, massive thanks for their courage and hard work.'
Photo by Patxi Usobiaga archive 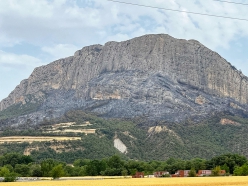 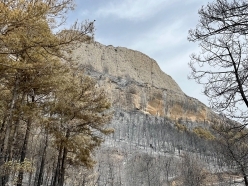 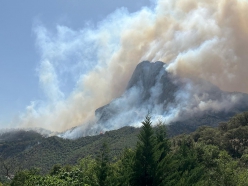 Wildfires raging across Spain have also burnt beneath Oliana, one of the most famous crags in the world.

Parts of southern Europe are currently locked in a heatwave of unprecedented proportions and Spain, in particular, is being devastated by raging wildfires and soaring temperatures that have forced residents to evacuate their homes and resulted in thousands of hectares of land being destroyed. Unfortunately on Sunday a fire broke out at Oliana, the world-famous crag in Catalonia that hosts some of the hardest sport climbs in the world such as La Dura Dura. Only after a concerted effort did firefighters manage to contain the blaze on Monday morning.

Svana Bjarnason, a French climber with Icelandic origins, witnessed the dramatic event unfold. She picks up the story on her IG account "It was still super warm and the wind was reaching 50 km/h so it escalated and travelled quite fast. It quickly reached the forest below the cliff then the cliff itself. For hours the crag was caught in the fire and smoke. Then, because of the wind, the fire went and continued behind the crag. It’s not until the next morning that they managed to control and stop the fire."

Two days after the fire broke out climbers were allowed to asses the damage and Bjarnason has described what she saw as "Apocalyptic scenery. Thank god, no one was hurt and the firefighters have done an amazing job, massive thanks for their courage and hard work."

The local climbers spearheaded by Patxi Usobiaga and Dan Forgeng are currently assessing the damage but the initial reports are as follows "the left part of the wall has been severely altered (from the route “Michi”), pre-placed quickdraws burned and many holds are now lying on the ground. The first layer of rock is destroyed, it’s breaking off just by touching it. It would need massive cleaning and rebolting. But the routes will never be the same again.

The main and right wall LOOK ok but some holds broke off and are on the ground as well, sometimes huge chunks. Inevitably the rock has been altered by the fire heat on other places. There might be micro cracks, what hasn’t broken off today might later, it’s impossible to know what is now solid or not. I also have no clue of the resistance of the quickdraws and bolts but it seems obvious that it’s been altered by the fire heat as well."

While the local climbers have already launched a crowdfunding campaign to help rebuild the crag, it is worth underlining that climate change is leading to more frequent, earlier and more extreme heatwaves. The issue of wildfires, as climate change PhD student Lena Müller points out, will only be enhanced by the climate crisis.

A post shared by Svana Bjarnason I Rock climber (@svanabjarnason)