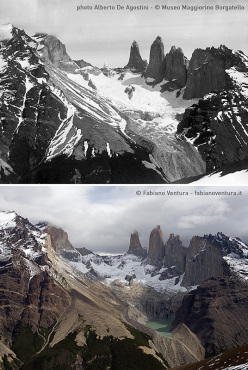 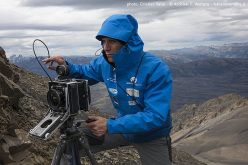 Italian photographer Fabiano Ventura is currently in the Torres del Paine National Park in Chile, Patagonia. The expedition he is leading plans to photograph the exact same locations as those taken by Alberto Maria De Agostini as part of multi-year project "On the trails of the glaciers" in order to document the effects of over 100 years of climate change.

"On the trail of glaciers", the project carried out by Fabiano Ventura is back in action. After documenting the Karakorum in 2009, the Georgian Caucasus in 2011 and Alaska in 2013, the team of researchers are currently in the world’s "deep south", namely the Tierra del Fuego and the Patagonian Andes. The mission, to study the effects that over 100 years of climate change have had on glaciers, has now led the team to the Torres del Paine National Park in Chile where Ventura has managed to locate the exact place where the explorer and photographer Alberto Maria De Agostini took one of his many famous photographs of the Torres del Paine.

The Roman photographer explained "With the historic photo in hand I began scrutinising the ridges to locate the exact position from where De Agostini had taken his photograph and I realised he had chosen a wind-sheltered position close to a rock on the summit ridge, just below the main summit. After controlling the shadows on historic photo I realised that I didn’t have much time before I needed to take the shot, and that I therefore had to quickly organize all the equipment. I positioned the Gitzo tripod and weighed it down with a ton of stones to stop the wind from blowing it away, then opened my folding Linhof and began the lengthy procedure of taking a photograph from the exact same angle as the historic shot. But this time conditions were really extreme. The winds gusted at over 120 km/h making it almost impossible to take a picture, my hands were frozen and given the conditions my body temperature dropped quickly. I worked hard at tightening the focus ring on the camera and at times got blown over by the strong gusts. In any case, taking the actual photo is always an exciting moment, I took advantage of a sudden ray of sunshine to expose the place and immediately afterwards I realized that on my photo, just like on the historic one, the tops of a mountain on the left side were covered by clouds. Immediately afterwards the weather began to worsen and it started to snow, so we were forced to quickly dismantle everything and begin the descent that finally warmed me up."

The team will now travel to the Los Glaciares National Park in Argentina and begin the most important documentation of the entire expedition.


18/07/2003 - Trekking in Patagonia
Trekking in a magical and mysterious land: three magnificent walks around the Torres del Paine, Fitz Roy and Cerro Torre, the stone heart of Patagonia.