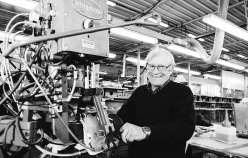 Galliano Bordin, founder of AKU in the company at Montebelluna, Italy
Photo by AKU 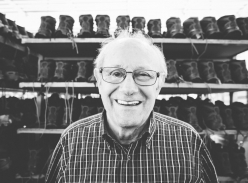 Galliano Bordin, the founder of the Italian footwear company AKU, passed away aged 85 on Saturday. The son of a family of shoemakers, Bordin founded the company at Montebelluna in Northern Italy and exported walking shoes, trekking and mountaineering boots and outdoor footwear to over 30 countries around the world including Europe, North America, Asia and Australia.

After a period of illness, at the age of 85 Galliano Bordin, founder of AKU, passed away on Saturday night. Active in the company until a few months ago, Galliano was a reserved but cordial person, esteemed in the sector and much loved by his collaborators, to whom he knew how to transmit in a simple and effective way the inexorable passion for a job that had accompanied him for the entire life.

The son of a family of shoemakers, Galliano, like many of his generation from Montebelluna, had in fact started working as a child in the world of footwear, demonstrating over time an extraordinary creative and technical ability in the manufacture of high quality products.

First by creating the Dinsport cross-country ski footwear brand and then the AKU brand, which became one of the main players in the mountain footwear market between the end of the 1980s and the early 1990s.

He leaves a company with a solid reputation on the international market, appreciated by the best operators in the sector precisely for the quality and unmistakable style of its models, many of which have been in the collection for decades and bear the Galliano signature.

The whole company with operational units in Italy, Romania and Serbia, together with several business partners in Europe, Asia and North America, huddles with affection around his wife Rita, their children Paolo, Silvana and Stefania. United to carry on the history of AKU in the name of Galliano.

09.02.2016
Cesare, son of San Mauro
The mountains are the last resort to save biodiversity. In this AKU film the Italian botanist Cesare Lasen talks about his life as scientist and man of the mountains.

09.07.2014
Walking, a long journey of discovery
Walking is part of everyday life but it is also a way of thinking and our freest and deepest thoughts come to us as we walk. By Teddy Soppelsa for Good For Alps, magazine AKU trekking & outdoor footwear.

12.06.2014
Farmers -The mountains are not an amusement park. They are first and foremost our home and our livelihood
Farming in the mountains has taken on a new role, promoting the local economy and having positive effects on the environment and society. Three great stories of farmers capable of combining tradition with innovation

16.04.2014
Repairers of the fragile mountain environment
The mountains are a harsh and at the same time fragile environment that needs to be treated with care. The wealth and stability of the mountain ecosystems are directly linked to the presence of man and the effects of a lack of maintenance in the mountains can be felt down in the valleys. Those who carry out maintenance and repairs in the mountains have changed, from farmers to institutions. By Teddy Soppelsa for Good For Alps, magazine AKU trekking & outdoor footwear.

27.03.2014
Shepherds and Alpine guides. Worlds apart?
Shepherds and alpine guides, two professions connected to the mountains and nature that, in this frenetically changing world, can inspire us in day-to-day life and live out our passions without forgetting our roots. By Teddy Soppelsa for Good For Alps, magazine AKU trekking & outdoor footwear.