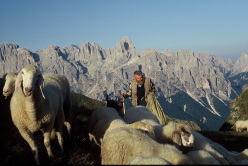 The shepherd Angelo Moltrer, with the Pale di San Martino (Dolomites) in the background.
Photo by A. Malacarne 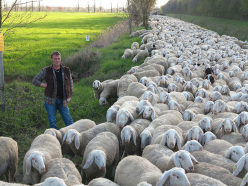 Celestino Froner on the Friuli plain
Photo by A. Malacarne 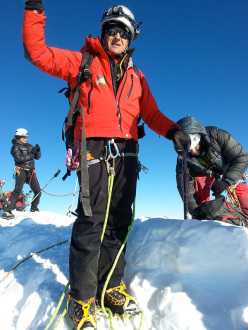 Shepherds and alpine guides, two professions connected to the mountains and nature that, in this frenetically changing world, can inspire us in day-to-day life and live out our passions without forgetting our roots. By Teddy Soppelsa for Good For Alps, magazine AKU trekking & outdoor footwear.

Since the second half of the last century the mountains have undergone a rapid transformation and this change has made it difficult to perceive and comprehend the roots shared by shepherds and mountain guides. Only by knowing about the profoundest values of their lives can we get closer to their world, one that asks the age-old - and topical - question about the relationship between man and mountains. Shepherds and Alpine guides have to contend with today's changing world and to be true to themselves, have to change their vision and have the courage to follow their passions.

Shepherds and Alpine guides have to contend with today's changing world and to be true to themselves, have to change their vision and have the courage to follow their passions.
Towards the second half of the 19th century when mountaineering really began to take off in the Alps, the shepherds who used to take their flocks to the high pastures became the first highly respected Alpine guides – together with hunters, smugglers and prospectors.

Although for many years Alpine guides and shepherds were considered to have many things in common, today we think of them as two very different professions. Yet this is not strictly true. Nowadays, just like a hundred years ago, Alpine guides and shepherds are responsible for finding the right way; their job requires the utmost care and attention because nothing can happen to the people they accompany or the animals in their care. Anyone in either profession must be driven, first and foremost, by a genuine love for their job. In the past the job was passed down from generation to generation, whereas today more and more people are choosing it as a way of life, often irrespective of their sex. It is a choice whose beauty lies in the large open spaces; whose strength is in its love for small things; whose poetry is in the silences, smells, colours and lights of the seasons as they pass.

If shepherds stop taking their flocks to graze on the mountain, it gradually begins to run wild again, flowers stop blossoming and a wealth of biodiversity is lost. Similarly, the presence of Alpine guides means someone is always keeping an expert eye on the mountains; Alpine guides also provide us with technical knowledge, they show us how to behave and heighten awareness of our surroundings: basic requirements if we are to enjoy the mountains in a responsible manner.

An Alpine guide's first priority is to assure his client's safety.
Andrea Enzio and Mario Mottini are two Italian Alpine guides. Enzio lives in Alagna Val Sesia, on the slopes of Monte Rosa on the border with Switzerland; Mottini, instead, lives in Livigno in Alta Valtellina, a short distance from the Bernina range and the Ortler Alps.

"I became a mountain guide out of love for the job" says Mottini, "my uncle was the first guide in Livigno and he passed on his passion to me". Enzio was also originally "motivated by a long tradition of guides in my family". According to Mottini, being an Alpine guide is not easy: "We have to adapt to our clients' continuously changing requests, from skiing on pristine snow to knowing the names of flowers". "An Alpine guide's first priority is to assure his client's safety" states Enzio. "Sudden changes in weather conditions call for greater care nowadays. My toughest moments? When I am working with the rescue services. You have to deal with emotionally charged situations, which often stay with you forever".
As we have seen, being an Alpine guide is also a family tradition: "If my daughters had chosen the same profession as me, I would have been happy but they made different choices" says Mottini, "but I do have a nephew who has just become a guide". "I think people should do what makes them happy" is Enzio's opinion, "and if my children were prompted to do this job out of real passion and not because they wanted to follow in my footsteps, I'd be happy".

The mountains are also the scene of great adventures, experiences and encounters. For Enzio the mountains mean "skiing on fresh snow with my father, paragliding with my brother, but also watching the sun rise and set in silence from the Margherita hut". Mottini's vision may not be as romantic but it is just as effective: "The mountains are like a television set that is always tuned into a new programme".

As our eyes soar to the top of the mountains, we see the Alpine pastures and we wonder who will be taking care of them fifty years from now. "I hope the future of the Alpine pastures sees a return to their origins and that the same passion of our ancestors prevails, even if it is assisted by technology". Enzio's hope is Mottini's confirmation: "In fifty years' time the Alpine pastures in Livigno will be managed by the young, just like now. The dairy business in Livigno has provided new opportunities. The average age of the breeders is, I think, under thirty with a horde of kids in the pastures and there are lots of youngsters who study agriculture with a view to setting up a farm. Here the local authorities have managed to integrate breeding and farming with tourism, dairies have become a tourist attraction and we all benefit. We call the farmers the "gardeners of the Alps"".

A shepherd's responsibility is to his flock. It's the flock that tells the shepherd what he should do and he must do.
Summer has come and the sheep are back in the pastures. At long last the shepherds can rest. Renzo Ganz (known as Trifase) and Celestino Froner are two transhumant shepherds from the Eastern Italian Alps. Ganz lives in Falcade in the Veneto Dolomites and Froner in Roveda, a small village of just twelve inhabitants in Val dei Mocheni in the Lagorai range.

"I have been a shepherd for twenty-five years" says Ganz, "as a young lad I used to help my parents on the mountain dairy farm in the Valles pass and San Pellegrino (in the Agordine Dolomites on the border between the provinces of Trento and Belluno, editor's note)". Froner, whose parents were also shepherds, has followed in their footsteps for twenty-seven years: "A shepherd's responsibility is to his flock. It's the flock that tells the shepherd what he should do and he must do everything in his power for the animals' wellbeing" and he continues: "My toughest moments are when we move to the valley in winter, down on the plains in Veneto and Friuli: moving the sheep from one place to another is made harder and harder because of the traffic, the more built-up countryside, the scarcity of grass, especially in February, relations with farmers which are often strained". Ganz agrees theirs in not an easy job, especially: "At the beginning of the winter with the cold, often the rain, snow and fog, the short days, not to mention the restrictions to rights of way and grazing".

Over the years Froner's sheep have grazed on the mountains of the Lagorai range and the eastern mountains of the National Park of the Belluno Dolomites in the summer and autumn. "There are more sheep on the mountains nowadays than twenty or thirty years ago" says Froner, "the number of flocks has gone up and they have more sheep than in the past. In some places the pastures are actually overcrowded". Ganz begins his seasonal migration in Pian de Fontana and Busnich in the National Park of the Belluno Dolomites:  "The mountain is in a constant state of flux. In many ways the changes have been for the better, like improvements in technology, safety. The last few years I have hired a helicopter to transport my material to the dairy farm, whereas before that would have been unthinkable".

Sheep farming is enjoying a period of renewed interest but the sector has been hit hard by many problems. "The future of transhumant sheep farming looks rosy only as far as keeping the flocks on the mountain in summer and autumn is concerned" is Froner's opinion and he goes on to add: "A lot of people would like to see sheep in the mountains but not on the lowlands. If we continue to be hampered by restrictive laws and regulations, only sedentary sheep farming will survive". Ganz shares his uncertain vision of the future of sheep farming: "Due to the endless restrictions in our work, growing bureaucracy, especially when applying for licences for right of way, which keeps us away from our flocks for long periods of time" and then adds: "Now sheep have microchips, even technology has entered the shepherd's life. In the future I think shepherds will "lean on" laptops rather than their staffs".

The mountains conserve memories, values and dreams, which help people in their lives. "A shepherd's time in the mountains is the best time for him" says Ganz, "it's a peaceful place, free of the restrictions and constraints of the lowlands. It's the time for you to "pamper" your dogs who have worked hard throughout the winter and spring. It marks a return to the old world. I think of my home, the dairy farm, the fireside". Froner has a dream too: "To return to the simplicity and freedom of the past, with fewer restrictions".

"Shepherds and Alpine guides. Worlds apart?" is a story written for GOOD FOR ALPS, magazine of AKU trekking & outdoor footwear.