► News ► Environment ► Farmers -The mountains are not an amusement park. They are first and foremost our home and our livelihood
Versione italiana 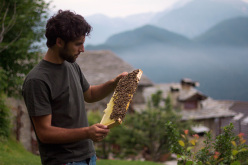 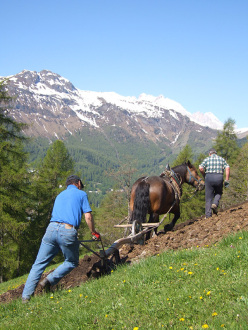 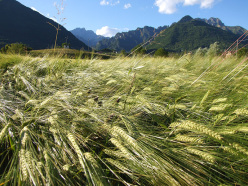 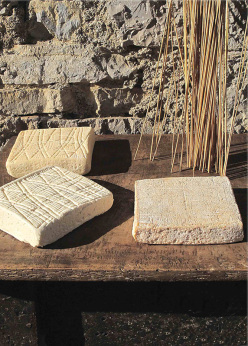 PORTFOLIO / gallery Portfolio: Farmers -The mountains are not an amusement park. They are first and foremost our home and our livelihood

Farmers -The mountains are not an amusement park. They are first and foremost our home and our livelihood

Farming in the mountains has taken on a new role, promoting the local economy and having positive effects on the environment and society. Three great stories of farmers capable of combining tradition with innovation

1500 metres up, the path emerges from the woods and our eyes roam freely over the sloping meadows which cover the northern sides of Piz Zorlet, just in front of the Marmolada. It is mid-July and the mountains appear to be daubed in red and purple spots. It is the spectacular flowering of the rhododendrons, which takes place every summer. For visitors from the valleys and cities, these flowers epitomise the beauty of the wild mountains, untouched by shameless tourism, but if we looked closer at what it means for the mountain folk, we would see its tragic destiny.
Throughout the Alps, rhododendrons are gradually reclaiming the pastures and abandoned meadows; their growth is proof that nature is taking back the space previously taken by man. With around 4500 flowering plants, the Alps play host to three sevenths of all European flora. Farming in the mountains is a key element of this wealth, but if it had not been for the grazing of livestock and cutting of the meadows, this habitat would have as good as disappeared.
After decades which saw the partial abandonment of large farmed areas on the Alps, the ’90s heralded the revival of farming and the pioneers of this change have mainly been the young. And so the mountains are slowly changing: the farmers who farmed for tradition are being replaced by those who choose to farm, whose lives and livelihoods are often very different from those in the mountains. Even the city's opinion of the mountains is gradually changing and today, on the educational farms and the model dairy farms, town dwellers are learning from the mountain farmers.
This social and cultural transformation is of prime importance for the mountains and despite some failures and difficulties encountered in implementing this on a wide scale, more and more new farmers are enjoying positive experiences and have successfully combined culture and experience, tradition and innovation.

The agro-biodiversity of the Belluno mountains, the specialities of the La Fiorita cooperative
In the area of the National Park of the Belluno Dolomites, the farming cooperative La Fiorita, which has over 200 members, grows and produces local specialities such as beans from Lamon and Gialét, Sponcio maize flour, Agordino barley, potatoes from Cesiomaggiore and Great Alpine spelt. All these products owe their revival to renewed interest in traditional age-old varieties from the Belluno mountains and are cultivated in compliance with eco-compatible, integrated and organic regulations and production methods.
The cooperative was founded in 1977 and over the past ten years the number of members has more than doubled, as has their fruit and vegetable production. This growth has been guided by the chairman Eugenio Garlet and Stefano Sanson, who teaches agrotechnical studies and was the person behind the decision to focus on the agricultural biodiversity of Belluno. "The bulk of our members are small-scale producers, the sons and grandsons of farmers who have inherited land and buildings which they somehow want to put to good use" says Sanson. "So production is concentrated in small businesses, which have often been split up by inheritances and whose vegetable production could bring in an interesting income. However, no one works full time in the business yet". Following the seasons, the members bring their produce to the cooperative and they are directly packed and sold.
"We aim for the shortest production chain possible" points out Sanson, "so we sell to restaurants, shops in the local vicinity and in neighbouring provinces. We are also on good terms with some fairtrade purchasing groups and we even promote our products at trade shows". The future of farming in the mountains is increasingly linked to the ability to share experiences and opportunities and, according to the chairman Garlet, this is the way forward for the cooperative: "In today's world we have to know how to work together as a team, but if we want to grow we have to increase our professionalism, training and business flair".

Chersogno: agriculture, landscapes and services immersed in the nature of the Cottian Alps
All these skills can be found in Daniele Landra's story who, at the age of twenty-seven, has brought together all his passions under the one roof. And that roof is the roof of his great-great-grandfather's house in the Maira Valley (in the province of Cuneo on the border with the French Ubaye Valley), which Daniele and his family have transformed into stunning farm accommodation. His passions instead are: Occitan music, beekeeping, photography and hiking in the mountains. After studying Forestry and Environmental Studies, Daniele became a nature guide and decided that the wood and stone house, the scene of his childhood games, would be a good starting point for a new adventure. After more than four years of intense work, at the end of 2012 Daniele officially opened Al Chersogno: organic farm and accommodation immersed in the natural setting of the Cozie Alps.
"I've always kept in touch with the places and history of my land" Daniele proudly says. "Strong emotional ties, the idea that you can make a living from farming and tourism in the mountains, do a job you like, where hard work and hardships take second place". One look at Daniele and you immediately realise nothing can be achieved without such passion: "We renovated our grandparents' house following the same philosophy of who built it over a century ago, respecting the land and the local architecture, using clean and renewable energy sources, like wood heating and solar panels". Daniele's farm is a model of multi-functional agriculture, which integrates production with the landscape and facilities. "Ours is a family run business which concentrates mainly on organic beekeeping, but we also grow vegetables, small fruit and we rear farmyard animals. We can accommodate about twenty guests, we organise educational workshops, photographic exhibitions, music evenings and Occitan cookery courses.
Here keen walkers can enjoy numerous hikes and climbs, ranging from family walks to peaks over 3000 metres high". The coherence of Daniele's project amazes when he explains the traceability of his beekeeping products: "We put a QR code on each jar which you can read with your mobile phone and which is linked to a video on the Internet. The video shows what is inside the jar, from the place of production to processing; in this way the product is linked to the land and we convey our passion for our work".

Six small zootechnic farms united around a treasure
In the province of Bergamo, in the Imagna Valley in the Orobie Alps, there is a village which plays host to a number of integrated and coherent mountain farming projects. The village is Corna Imagna, 800 metres above sea level and with just under one thousand inhabitants. The project originated from the Casa dello Stracchino, a small but functional cheese farm founded by the members of the farming cooperative "Il Tesoro della Bruna", six small companies all with one love: the milk of the brown Alpine cow. In just a couple of years, the cheese farm has been joined by a hostel, a camp site, a shop with a small educational museum and, recently, an inn which is unsurprisingly called "Locanda dello Stracchino". And, if that were not enough, there is also a series of trails along the old local footpaths (all georeferenced and with downloadable apps), other farms in the area have gone online (selling small fruit, vegetables, apples) to meet the needs of fairtrade purchasing groups and a busy market has been opened selling locally sourced produce.
Giacomo Invernizzi, deputy mayor of Corna, is one of the members of the farming cooperative. "In the past, Lo Stracchino constituted most of the farming economy in the Imagna Valley" says Invernizzi, "then, in more recent times, it became a family run business which symbolised the decline in farming whose economy was insignificant". Driven by the desire to restore some dignity to the small local farms and make them sustainable, and convinced that tending the land can provide a basis on which other economies could flourish, the local authorities in Corna Imagna started talks with the farmers: "And so the farming cooperative "Il Tesoro della Bruna" was founded" continues the deputy mayor Invernizzi. "We strove to adopt a business model that was compatible and sustainable for the mountains, creating a local production set-up where the environment and cultural resources gave the area a new boost. The Casa dello Stracchino and the farming cooperative are a symbol of the valley which, thanks to its self-awareness and self-determination, is trying to build a future for itself".