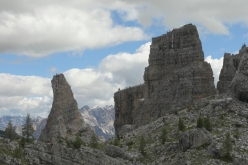 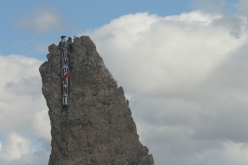 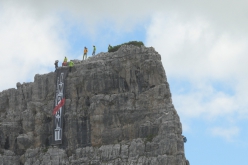 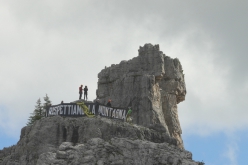 The press release concerning a 'mountaineering' flash mob that took place on 03/40/2020 on the Cinque Torri (Cortina, Dolomites) in protest against new ski lifts and constructions in the Dolomites.

Businessmen, pro climbers, mountaineers and hikers met on the summits of the 5 Torri, in Cortina d’Ampezzo, Italy, to demonstrate against the planned construction of ski lifts and infrastructure in the Dolomites.

"We are not against skiing and we are not fundamentalists", explained Valerio Scarpa on behalf of all those who took part in the protest, "We love the mountains, experience them 365 days a year, in all seasons, for work and passion, yet we are helplessly witnessing the systematic destruction of those few remaining areas in the Dolomites that are currently not served by ski lifts.”

The FIS Alpine World Ski Championships and the Cortina Winter Olympics in particular are having an important impact on the Tofane and Cinque Torri slopes, as ski lifts and the connected infrastructure is being expanded significantly.

Furthermore, the Marmolada Carosello project includes the construction of two new chairlifts that lead from the Fedaia dam to Sass Bianchet, just dozen meters away from the Punta Rocca station. Other developments include a chairlift that coasts the lake, with zero altitude difference, and the replacement of two chairlifts currently in disuse, further compromising a difficult situation in a very delicate environment.

“What angers us most however is the "No Car” project" explained Guido Trevisan, owner and manager of the Pian dei Fiacconi hut "highly desired by the Veneto Region (it provides the ambitious link between the ski areas of Cortina, Arabba and Civetta) ; using the private vehicle reduction on the mountain passes as an excuse, it provides an alternative which is unsustainable from both an environmental and an economic point of view as it significantly impacts forever two of the areas of greatest environmental and historical value in the Venetian Dolomites: Giau and Sief."

The group argues that each project will affect the environmental quality of the mountains to the detriment of future generations, while providing a form of ​​tourism that has already proven its flaws. In addition, the group underlines the fact that none of these projects have been minimally agreed with the local population or with local administrations, as highlighted by the view expressed by some mayors.

"We are not against skiing and we are not fundamentalists, but we do not want these projects to be imposed on us without even having the opportunity to express our concerns. The time has come to act and make our voices heard to defend the land we love."