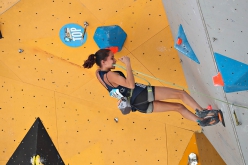 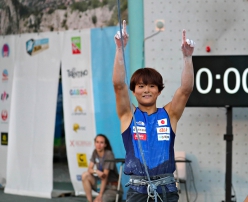 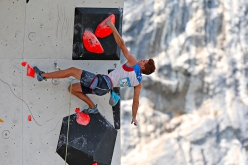 "In the semi-finals I hurt my finger and unfortunately I can’t take part in the next competitions. I felt a pain in my finger in the first part of the route, there’s still no precise diagnosis. It's a shame because I had prepared myself in the best possible way and the routes were beautiful, my World Championship is over", stated Filip Schenk, superlative also yesterday at the Climbing Stadium in Arco arriving second in the lead semi-finals and entering the final of the Climbing Youth World Championships. But the athlete from South Tyrol unfortunately couldn’t compete in the final and can’t even conclude a ride started in the best way in the other disciplines, speed and bouldering.

Schenk’s absence dashed all Italian hopes of winning a medal in Arco today. The Japanese athletes were able to take home the whole podium in the Youth B category, a success that was the result of the number of gyms and enthusiasts – commented a member of the Japanese national team, and perhaps also of their physical constitution and mental strength, which is made of strong fibres such as those of the champions of martial arts, and spirit. Junta Sekiguchi won ahead of Haruki Uemura and Satone Yoshida in the Youth B male competition, and Shuta Tanaka triumphed among the Juniors ahead of Sohta Amagasa, third place for the French Alistair Duval. In the Youth B female category, the fourteen-year-old Oriane Bertone, who has Italian roots since her father Stefano comes from Turin, won ahead of another Japanese, Hana Koike, and of the Bulgarian Aleksandra Totkova.

It's a pity for Schenk and Italy, but yesterday's finals were really exciting – thanks to the organisation of SSD Arrampicata Sportiva Arco – with a head-to-head between Sekiguchi and Uemura; the winner told a curious fact, explaining how he started to climb: "Watching the TV show Ninja Warrior, I wanted to do something similar.”

Stefano Bertone's life is full of surprises, he married a Frenchwoman and they had Oriane, he got a place to teach on the Island of Réunion and moved there. A very particular environment with basalt sectors and many boulders, many blocks. And there Oriane began a gradual but unstoppable sporting life that took her, at the age of only fourteen, on top of the world. An unexpected result in the lead competition, given the 'bouldering' passion of Oriane, who gives a European nuance to this spectacular ten-day event in Arco among the Asians’ successes. And in a few days there will be the bouldering finals, and there’s nothing to lose for an athlete in her first year in the international circuit.