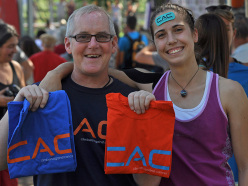 The encounter with John Ellison, founder of CAC - Climbers against Cancer, at Arco for the IFSC Youth World Climbing Championships, to receive the Dryarn Climbing Ambassador award during Arco Rock Legends celebration on 04/09/2015 for his undisputed contribution to the culture of climbing worldwide.

"That’s a great colour! I’ve got one of those myself!" It’s like this, with a twinkle in his eyes and a smile on his face, that John Ellison introduces himself. We’re holding one of "his" T-shirts, one of those with the logo of CAC - Climbers against Cancer, the charity and worldwide movement he founded. It comes as no great surprise therefore that John has this color, and probably many more. He embodies the spirit and at the same time the most profound meaning of those colours and words printed on the T-shirts!

Ellison is here in Arco to watch the World Youth Championships unfold and to do something of utmost importance to him: make an official 10,000 euro donation on behalf of CAC to a cancer research institution, this time in Mexico. But also to receive an important prize - the Dryarn Climbing Ambassador - that the Arco Rock Legends will award him on Friday evening for his contribution to the culture of climbing worldwide.

Ellison, in these years, has travelled the world for competitions and for climbing. Like in 2005 when he travelled to Arco for the first time to accompany his daughter. "Charlotte was actually the first girl from the UK to compete in the Rock Junior, and now 10 years later I’m here to watch the fantastic World Youth Championships. It’s a great event! The climbing looks superb, people are happy and smiling… what more could you want? Oh, and of course the ice cream tastes great!"

Great, like his constant involvement in CAC that aims to raise awareness of this illness and raise funds that are then destined to various cancer research institutions. An idea, his idea, that was immediately and unconditionally embraced by the entire climbing community, so much so that in just over two years more than 25,000 T-shirts have been worn with pride by thousands and thousands of climbers worldwide. Circe 500,000 euro have been raised so far, proving that cancer awareness has no barriers.

The prize, entitled Dryarn Climbing Ambassador, will be awarded on Friday night during the Arco Rock Legends, the sport climbing Oscar-like celebration. This is the event’s 10th anniversary and there couldn’t have been a better "ambassador". "I was bowled over when I first heard the news" says John. "It’s a real honour, but at the same time…" he lowers his eyes for a second, then continues "at the same time I don’t feel like I really deserve the award. You know, I’ve always seen CAC as something far bigger than myself, something that belongs to everyone. So basically I’m accepting the award on behalf of everyone!"

John, it is immediately clear, talks from the heart. With a twinkle in his eyes and a smile that are impossible to ignore. A smile that despite the objective and increasingly complicated difficultie feeds itself off the climbing world. "Yes, they’re the ones who give me the energy I need" explains John, before adding "You know what effect it has when I see all these climbers wearing the T-shirts? It gives me a smile, it makes me happy."

The meeting with John Ellison is Friday at 21,00 at the Casinò municipale in Arco for the 10th Arco Rock Legends.

WE WILL BE THERE WITH OUT CAC - CLIMBERS AGAINST CANCER T-SHIRTS. AND YOU?