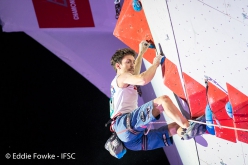 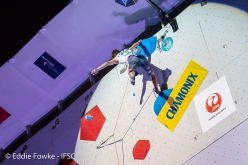 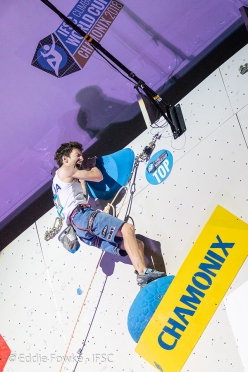 Stefano Ghisolfi climbs to Chamonix at his feet

Interview with Stefano Ghisolfi after his victory at Chamonix of the second stage of the Lead World Cup 2018.

During last Saturday’s magical midsummer night in Chamonix Stefano Ghisolfi enchanted the huge crowd at the Place du Mont Blanc and, without hesitation and without a single mistake, climbed to victory in the second stage of the Lead World Cup 2018. Climbing without any apparent difficulty, Ghisolfi clinched the route’s only top, surpassing both Jakob Schubert and Alexander Megos who had climbed higher than the Italian in the semifinals. This victory is somewhat special: it is Ghisolfi’s fourth after Wujiang in 2017, Xiamen in 2016, Wujiang in 2014 but, above all, it is his first win on the old continent. Just like the Austrian Jessica Pilz who had celebrated her first-ever World Cup victory a few minutes earlier, the 25-year-old chose an exceptional stage to demonstrate that he’s focused on improving last season’s second place in the overall standings. For the record, with this gold medal Ghisolfi joins another three Italians who won beneath Mont Blanc’s star-studded sky: Marcello Bombardi in 2017, Flavio Crespi in 2007 and Dino Lagni in 2000.

Chamonix four days later. Can you explain what this victory means to you?
Having broken the Chinese curse! Demonstrating that I can also win "at home" was important, Chamonix is ​​the competition that attracts the most competitions and spectators and, compared to China, winning here is worth that little bit extra even if a victory is always a victory. But if I had to choose where I could win, I’d definitely choose Chamonix and Arco

In the semifinals you weren’t the best. But it was obvious that you were on tremendous form
Yes, I felt good in the semifinals, not on a par with Alex and Jakob who were better than me on that route, they seemed in a league of their own, but one could see in that round who stood a realistic chance of standing on the podium. Even if, the finals, anything can happen.

There was a huge crowd that evening. When did you realise how big it was and how much do the spectators affect your climbing?
I didn’t notice anything, I was really focused and I felt as if I was along training, I managed to black everything else out. I only realised how big the crowd was when I reached the top and looks down. The spectators can really incite you, but they can also be cause for distraction and increase the pressure. You have to deal with this and make it work in your favour.

You topped out in the final. The only top as it happens. Hard to think of a better way to win, right?
This competition couldn’t have worked out better, a single top in the final and win is absolute perfection, for both the route setting and the show for the spectators. I’d say I climbed to my absolute max.

And you topped out with just a few seconds to spare… Suspense right to the bitter end
I rested wherever possible, calculated how much time I’d need to reach the top and left just at the right moment. Before the dyno for the top hold I saw that I still had several seconds, I rested briefly once more and then went for it, finishing with 21 seconds to spare. As I climbed I checked the time constantly and time was never an issue, actually I used the time to my advantage, trying to recover for as many seconds as possible.

You always seemed in control. But to win, d’you need more control or more willingness to risk things?
Obviously you need just the right thing at the right time on the right route. In the semi-final one had to risk a lot more, because of the type of route, the climbing was far more touch and go. In the final it was all about control, I never had any doubts at all about what to do next and never really risked falling off. The only point where I wasn’t certain that I’d stick the next hold was the dyno for the top.

Dino Lagni in 2000, Flavio Crespi 2007, Marcello Bombardi 2017, Stefano Ghisolfi 2018. Chamonix seems to bode well for the Italians
Chamonix has always been a bit Italian, perhaps because of its proximity and because many Italians come across to watch the competition. In truth I don’t know why the Italians do so well here! Actually, in the past I’ve always had my difficulties here, for years I struggled to get past the semis, and then I struggled just as much to qualify for the finals.These are my results in Chamonix from 2009 to today: 58, 31, 30, 13, 16, 25, 7, 2, 7, 1.

This weekend there’s the competition in Briançon. Then there is the Rock Master in Arco. How do you see the season unfold?
This season is much more difficult than last year, in addition to Schubert and Megos in every competition there are many boulderers, like Narasaki, who make qualifying in every round far harder. A mistake, even the smallest, can prove costly and make you miss the cut to the semis of finals. With the advent of the Olympics, the numbers of participants has increased and the athletes have improved significantly. In addition, Adam Ondra will be in Arco and qualifying for the final or making a place on the podium will be really difficult.

Last question Stefano: you never hide your goals ...
After coming second overall last year, this year's goal is to win. Another important goal is the World Championship in Innsbruck, everyone will be there and they’ll all be on top form. Making it onto the podium would be a dream come true.