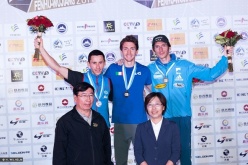 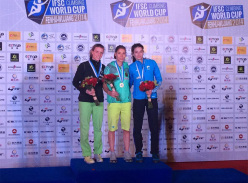 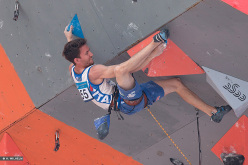 On 19 October 2014 the sixth stage of the Lead World Cup 2014 was won at Wujiang in China by Italy's Stefano Ghisolfi and Slovenia's Mina Markovic. The Speed World Cup was won by Qixin Zhong and Mariia Krasavina.

It's a historic moment for Italian sports climbing: on Sunday evening at Wujiang Stefano Ghisolfi won the Chinese stage of the Lead World Cup 2014, giving Italy that victory it's dreamed of for 7 years, ever since Flavio Crespi – in 2005 the only Italian to win the overall World Cup – won a World Cup stage in Chamonix in 2007.

Victory in Wujiang is an important step in the competition career of the 21-year-old climber from Turin who only once before had won a podium position, a superb third place in China last year. That Ghisolfi had taken things a stage further this season was clear to all, at the latest on Sunday morning when he qualified for his fourth final this season. Beating, as it happens, climbers who have won far more, such as the two Lead World Champions Adam Ondra and Jakob Schubert who failed to make it further than the Semifinal and finished 19th and 17th.. Ghisolfi qualified 6th for the final and, setting off second, he managed to give what he himself defines as “the maxiumum” to reach hold 36+. His was an impressive climb, a true masterpiece of dogged determination and technique, followed by a war of nerves as he watched his fellow competitors climb after him and fall... lower down! Ghisolfi's heart skipped a beat when Ramon Julian Puigblanque reached the same hold as he did, but the Spaniard failed to move on to the next one as the Italian had. This wasn't a great omen seeing that the best three were still in isolation: Slovenia's Domen Skofic, France's Desgranges and above all Canada's Sean McColl, the only athlete to top out in the Semis. But for them, Sunday at Wujiang, there was nothing doing, the stars had finally aligned for Ghisolfi and all three fell lower than him, meaning that the Italian won his first ever World Cup stage! A victory that has a far greater meaning, one that is difficult to put into words, that rewards years of training and sacrifice and an athlete who believed in his abilities 100%, so much that he risked everything and travelled to China as the only representative of the Italian squad...

In the women's event Slovenia's Mina Markovic, after having won a week ago at Mokpo, took the top podium position once again, beating Belgium's Anak Verhoeven and France's Hélène Janicot. This "photocopy" result of South Korea continued with 4th and 5th place going to the Austrians Magdalena Röck and Katharina Posch. Japan's Yuka Kobayashi and Aya Onoe finished 6th and 7th respectively, while Slovenia's Maja Vidmar finishe 8th. Reigning Lead World Champion Jain Kim had a tough time in China, too, and in failing to qualify for the final lost precious points in the race for the overall world Cup: her lead has been whittled down to a meere 11 points, 461 compared to the 450 points of Röck and the 414 points belonging to Markovic.

The Speed World Cup took place in China, too, and was won by home athlete Qixin Zhong and Russia's Mariia Krasavina, ahead of Libor Hroza from the Czech Republic and France's Anouck Jaubert. Third place went to her teammate Bassa Mawem and Russian's Iuliia Kaplina.