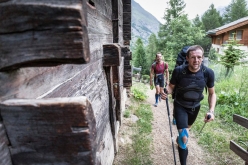 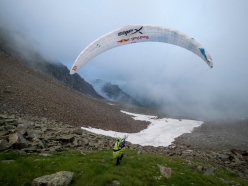 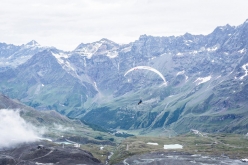 Red Bull X-Alps, the going gets tough even for Christian Maurer

The ninth day of the Red Bull X-Alps 2017 proved to be more difficult than expected with many athletes making little headway, including competition leader Christian Maurer who is currently 150 km from the finish line.

It’s been a long day for all athletes competing in Red Bull X-Alps 2017. What many thought would have been a mere formality, a flyby for Switzerland’s Christan Maurer from the Matterhorn summit to the Monte Carlo, proved to be much more complicated and difficult than expected.

After four straight wins, for the first time ever the current leader decided to switch routes and opted against French territory in favour of Italy’s Aosta Valley. This because the wind conditions did not favor flying and for long parts of the day the Swissman continued walking through the bottom of the valley.

In short, no raft off Monte Carlo today, that acts as the finish line, but instead plenty of hardship and suffering, even for all the other athletes engaged in the competition. Starting with France’s Benoit Outters: the 27-year-old is also in Valle d'Aosta, currently walking close to Arnad and 65km away behind Maurer. In third place, Austria’s Paul Guschlbauer tried in vain to reach the penultimate Matterhorn turnpoint while the group behind him tried its best to catch up with him.

A note about the the National Park of Mercantour, located on the border between Italy and France and an important obstacle prior to the last Turnpoint on Mount Peille on the hills above the Principality of Monaco. Those who plan to paragliding across it must fly at least 1000 m above the ground and, furthermore, are forbidden to take off or land in the park. Whoever breaks this rule will be punished with a 48 hour time penalty ...

In short, the last chapter has still to be written and it will be interesting to see the race strategies of the athletes and their teams.

09.07.2017
Red Bull X-Alps 2017: Christian Maurer reaches the Matterhorn, Gaspard Petiot retires from race
At the start of the eighth day of the Red Bull X-Alps 2017, Switzerland’s Christian Maurer reached the last turnpoint at the Matterhorn and is now heading towards the finish line at Monaco. Yesterday his strongest rival, France’s Gaspard Petiot, was forced to abandon the competition.