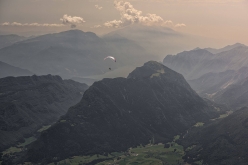 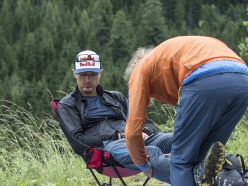 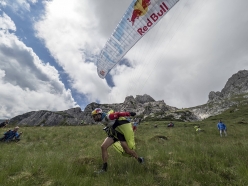 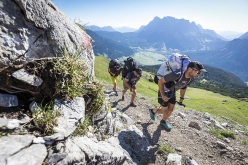 Switzerland’s Christian Maurer continues his lonely lead and a massive flight has taken him to the Turnpoint at Monte Baldo (Italy). France’s Gaspard Petiot trails in second place, Austria’s Paul Guschlbauer is currently third. Unfortunately this morning Italy’s Aaron Durogati was forced to pull out of the race due to his knee injury.

The fifth day of Red Bull X-Alps 2017 began with a rece retirement. A painful one: Italy’s Aaron Durogati was unable to continue. The injury to his left knee, which began last Sunday on the first day of the competition, has forced him to abandon the event. Until yesterday the two times the winner of the Paragliding World Cup had fought like a lion, flying fast and making up for lost time in the air despite his handicap. Furthermore, he had also won the Race Prologue. But this morning the South Tyrollean was unable to continue and abandoned the competition in provisional 9th place, after having been 5th and 6th for a long time. His battle gives an inkling as to the physical and mental strain athletes have to endure during competitions such as the Red Bull X-Alps.

So as of this morning the original 31 athletes have whittled down to 27. What hans’t changed however is the man at the helm, and even on day 5 Christian Maurer continued his lonely lead. First on foot, then flying, he quickly reached Turnpoint 5 on Monte Baldo, high above Lake Garda in Northern Italy. During the last 25 km the Swissman had to fight against strong headwinds, and after a tough battle he landed at an altitude of 300m and then walked up to the turnpoint. In doing so Maurer won the special Salewa Monte Baldo Trophy. So far the four-time X-Alps winner has covered 639 of the 1,138 km and is therefore just over halfway. The next stop, or Turnpoint, is the Matterhorn, after which he only needs to fly down to the finish at Montecarlo less than 500 km away.

Maurer’s rival is trailed in Italian airspace by France’s Gaspard Petiot of Team FRA2, circa 50 km behind. At 17:20 he was still struggling to reach Mount Baldo. It seems as if tonight Petiot will use his night pass to try to bridge the gap that separates him from Maurer. Meanwhile Paul Guschlbauer (AUT1) follows in third place. France’s B. Outters of FRA4 celebrated a remarkable comeback to slot into provisional 4th, ahead of S. Huber (GER1), P. Takats HUN, M. Nübel GER2, N. Neynens NZL, F. van Schelven NLD, S. Oberrauner AUT4, P. Purin AUT3. At 17:30 all were between kilometres 644 to 675.