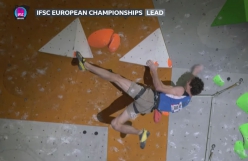 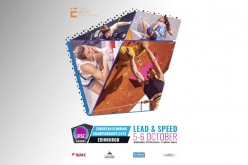 Edinburgh in Scotland is hosting the European Lead Climbing Championship today. Live streaming of the semifinals at 9:25 am, of the finals at 15:00. Last night the European Speed Championships was won by Vladislav Deulin and Aleksandra Miroslaw.

This weekend Edinburgh is hosting the European Lead and Speed Championships. Yesterday the speed devent was won by Vladislav Deulin and Aleksandra Miroslaw, while Mariia Krasavina and Danyil Boldyrev took silver and Anouck Jaubert and Dmitrii Tomofeev took bronze.

After yesterday's intense Lead qualifiers, the competiton continues this morning with the semi-finals starting at 9:25 am and the finals starting at 3:00 pm. Some of the biggest names in competition climbing such as Janja Garnbret, Stefano Ghisolfi and Marcello Bombardi, have decided to skip the competition in Scotland, providing an opportunity which many will find too good to miss.

18.07.2017
The Most Beautiful Photos of the Campitello European Climbing Championship by Ralf Brunel
The 70 best photos of the European Lead Climbing Championships 2017 at Campitello di Fassa taken by talented climber and photographer Ralf Brunel, the only Ladin athlete to have taken part in a Rock Master competition at Arco, back in 1997, won by François Legrand ahead of Cristian Brenna.