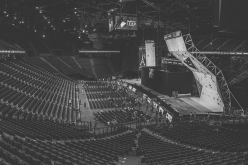 The photo published by Austria Climbing on Facebook, with the following description: No crowd? Is this the future of world cup climbing? The World Cup live stream will no longer be free: A decision we oppose because we believe that access to competition streams should be as easy as possible. If you think the same, head over to International Federation of Sport Climbing (IFSC) and make your voice heard!
Photo by Austria Climbing 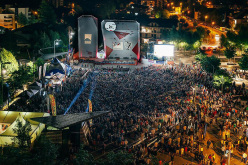 The IFSC, the International Federation of Sport Climbing, has announced a deal with Flosports. As of tomorrow and for the next three years, the sport climbing World Cups will no longer be streamed online free of charge, but on the American subscription based platform. Social media channels have been inundated with criticism.

Yesterday the news was announced that the sport climbing world cups would no longer be transmitted free of charge via youtube. The IFSC, the International Federation of Sport Climbing, who holds the rights for the international climbing circuit, has signed a three-year deal with the US subscription-based streaming company Flosports. This means that as of tomorrow, anyone wishing to watch the Lead, Boulder or Speed World Cups unfold live, or delve into the archive of past editions, will only be able to do so by paying $20 per month (circa 19 €) or, alternatively, $150 per year (circa 140 €).

In the official press release the IFSC president Marco Scolaris motivated the decision as follows "With our partner FloSports we are beginning a new adventure. We’ll offer climbing fans a deeper level of event and climbing coverage. FloSports’ interest in climbing will also allow the IFSC to invest more in high quality production at IFSC events to bring the beauty and excitement of sport climbing to its fans."

The news caught fans off guard and surprised the athletes and many federations who are currently adding the final touches to the start of the 2017 season, which begins tomorrow morning with the first stage of the bouldering world cup at Meiringen in Switzerland. The decision comes at a very delicate time for the IFSC: although it managed to get sport climbing recognised as an Olympic sport by being included in the Tokyo 2020 Olympic Games, right from the outset the competition formular was heavily criticised by both athletes and federations.

This recent subscription agreement has received even more ferocious criticism, above all on the social media channels where almost everyone views this as a giant step backwards for the development of this sport, also because of the disproportionately high cost of the monthly or annual subscription rates. Austria Climbing, the Austrian sport climbing federation which will host the 2018 World Championships in Innsbruck, has opposed this decision and shared the online petition, promoted by Peter Crane, to cancel the fee. In just a few hours over 5000 climbers have signed the form and this number seems destined to rise significantly in the future.

Update on 07/04/2017
Following the protests of thousands of climbers, athletes and their federations, the IFSC has decided to offer the first World Cup stage free of charge. The semifinals will be streamed live on Saturday morning at 11, the Finals at 18:30. As to the future stages, the IFSC is currently in talks with Flosports to “ provide the best possible offer for the next months.”