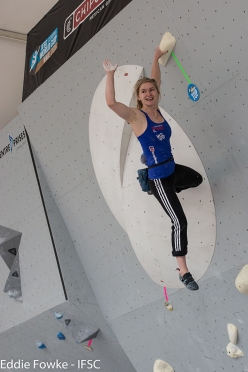 Shauna Coxsey during the six stage of the Bouldering World Cup 2016 in Vail, USA
Photo by Eddie Fowke / IFSC 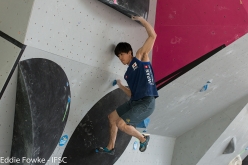 Kokoro Fujii during the six stage of the Bouldering World Cup 2016 in Vail, USA
Photo by Eddie Fowke / IFSC 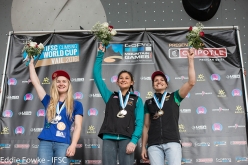 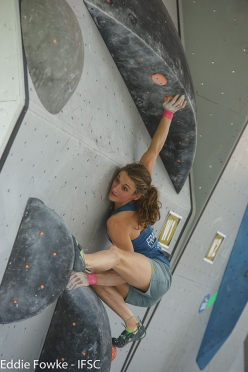 Mélissa Le Nevé during the six stage of the Bouldering World Cup 2016 in Vail, USA
Photo by Eddie Fowke / IFSC

Shauna Coxsey has won the Bouldering World Cup 2016. With an astounding run of 4 victories and one 9th place, the British ace had completely dominated the 2016 season and her 118 point lead prior to the sixth and penultimate stage in Vail on Friday and Saturday meant not only that she was tipped hot favorite to win the overall standings, but also that she might make British sport climbing history one stage ahead of schedule. The 23-year-old made it into the finals by the skin of her teeth by qualifying last but then, after having placed second in 2015, she made sure she wouldn’t waste this golden opportunity; her second place makes her the first UK climber to win a Bouldering World Cup overall title! Her good friend John Ellison would have been very proud indeed.

Coxsey finished second behind America’s rising star Megan Mascarenas who evidently has a penchant for Vail: the 18-year-old won here in 2015 and last night she produced a nigh-perfect run of a mere 5 attempts needed for all 4 tops, including the tricky slab on problem #3 which only she managed to send. Coxsey finished second with 3 tops, while Anna Stöhr returned to World Cup podiums by beating Mélissa Le Nevé by a tiny margin: although both secured two tops in the finals, the Austrian needed three attempts less than the Frenchwoman to reach a bonus hold. Miho Nonaka, prior to Vail the only athlete still in with a chance of winning the overall title, piled the psychological pressure on in the Semis by qualifying provisional first, but then slipped into fifth place, just ahead of Alex Puccio who celebrated her return to fighting form after her injury here in Vail a year ago.

In the men’s event the race for overall victory prior to Vail was still wide open, above all between Tomoa Narasaki, Kokoro Fujii and Alexey Rubtsov, meaning that this round would prove absolutely crucial to the overall standings. Fujii gained vital points by topping two problems - the only athlete to do so - and in doing so he leapfrogged into provisional first, at the expense of his teammate Narasaki who finished second in Vail after flashing 1 top and reaching 4 bonuses in 7 attempts. Alexey Rubtsov, Yoshiyuki Ogata and Rustam Gelmanov all flashed the same top as Narasaki and so third, fourth and fifth place were split by the number of attempts needed to reach the bonus holds. Further proof of how tricky these finals were came from Canada’s Sean McColl, who battled valiantly yet finished sixth with no tops and three bonuses.

Fujii, Narasaki and Rubtsov are now separated by a mere 62 points and the overall title will be decided in the last stage of the Bouldering World Cup, which will take place in Munich, Germany on August 12th-13th.