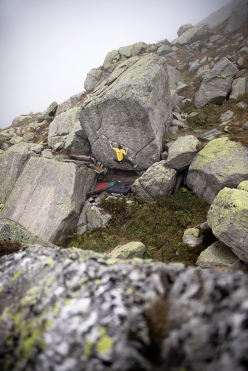 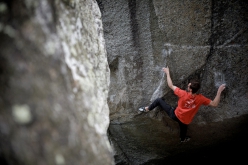 Will Bosi flashing Dulcifer Sit (8A+) in Schöllenen Gorge.
Photo by Band of Birds 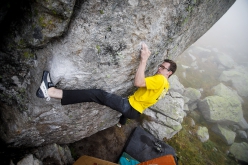 Scottish climber Will Bosi has made a short but successful climbing trip to Switzerland, during which he repeated a flurry of hard boulder problems including the 8C Foundation’s Edge.

After Spain at the start of the year which culminated in the first ascent of King Capella 9b+ in Siurana, Will Bosi has just returned from another successful climbing trip to the continent, this time bouldering in Switzerland. Will joined up Americans Dave Graham and Shawn Raboutou and despite poor conditions managed to amass an impressive ticklist in the short time he was out there.

In Fionnay, near Verbier, Bosi made quick ascents of Dave Graham’s king line Foundation’s Edge (8C) as well as Scarred for Life (8b+) before moving to the Gotthard Pass to climb Hazel Grace (8B+). Over in the Susten Pass, Bosi made quick ascents of Highlander (8B+), Gepresster Hase (8B+) and a flash of Red Snapper (8A+). Finally Bosi made a flash of one of the best looking lines in the area, Dulcifer Sit (8A+) in Schöllenen Gorge.

Will commented on the trip: "These boulders are absolutely incredible, so just being able to try them was great fun. It was hugely rewarding to get them sent fast as well. Definitely shows my training has been paying off and that I am in a good shape. It gives me more confidence in the FAs I did at the beginning of the year in Spain but it is back to training now for future projects next year!"